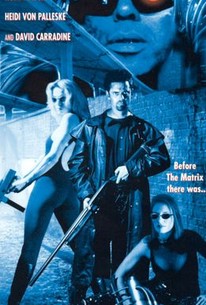 In 2017, the survivors of a worldwide apocalypse do battle for supremacy in this sci-fi adventure. Most of the Earth has been reduced to ruins, and the pitiful few who have survived have moved underground and organized themselves into religious cults who wage war among themselves for dominion over what's left of the planet. A self-ordained holy man (Roddy Piper) kills the family of a roving mercenary (C. Thomas Howell), and the warrior swears revenge. He joins forces with a beautiful female killer-for-hire (Heidi Von Palleske) and they set out to win back the world for the forces of good. Cybercity also features David Carradine.

There are no critic reviews yet for Cybercity. Keep checking Rotten Tomatoes for updates!

There are no featured reviews for Cybercity at this time.