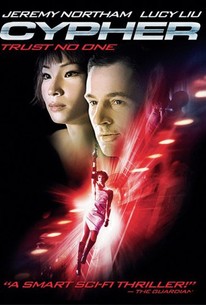 Director Vincenzo Natali, famous for being the man behind the cult classic Cube, helms this spy thriller from the debut screenplay by writer Brian King. Jeremy Northam stars as Morgan Sullivan, a man who suddenly finds himself deeply embroiled in the fast-paced and dangerous world of corporate espionage. But it isn't until Sullivan meets a mysterious woman named Rita (Lucy Liu) that he begins to realize exactly what he's gotten himself into. Also starring David Hewlitt and Kari Matchett, Cypher was the winner of the Grand Jury Prize for Fantasy at the 2003 Fantasporo Film Festival.

Natali can't be bothered to fashion an actual human story around the perpetually buzzing toys and non-stop backstabbing and double-crossing.

Brian King's screenplay make this a fast paced science fiction adventure very much of the style of Philip K. Dick.

A bit too clever and precious for it's own good, it's a fairly decent yet predictable near-future thriller.

High style and noirish overtones about mind control and brainwashing in corporate America. Nothing new there, so nothing new here.

Just like the spies' mission as they hunt for secrets and significance inside massive corporate databanks, [Cypher's] point is unclear.

...it declines into high-tech gizmos, whizbang hardware, and hairbreadth escapes, leaving the brain behind for the sake of sheer, overinflated thrills.

It might be just another "DTV dump" title for Miramax, but I'd call Cypher (easily) one of the best direct-to-video titles I've seen all year.

combines industrial espionage with alternative reality in a satisfyingly mind-bending plot reminiscent of Philip K. Dick at his best.

I liked it during the scenes when something "cool" was being revealed on screen, but the moment that "cool" ended, my interest waned.

Very cool cyber-spy thriller that I just chanced upon. Well worth an evening's viewing. A hi-tech industrial espionage plot with many twists and one of the coolest sci-fi vehicles (helicopter) I've ever seen.

Pulpy sci-fi espionage thriller that's so full of twists and turns you soon don't know whether you're coming or going. Some nice shots and good use of effects, though, and Lucy Liu is always welcome.

Pulpy sci-fi espionage thriller that's so full of twists and turns you soon don't know whether you're coming or going. It often seems that the plot is unnecessarily convoluted just for the sake of appearing more clever than it really is, but Lucy Liu adds some much welcome glamour.