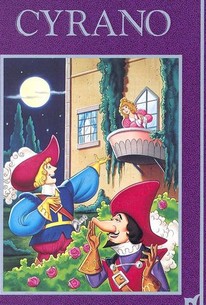 For its third animated-cartoon presentation, ABC Afterschool Special offers a streamlined adaptation of Edmond Rostand's romantic play +Cyrano de Bergerac. The best swordsman and wittiest raconteur in all France, Cyrano de Bergerac (voiced by José Ferrer, recreating his most famous Broadway role) also has one of the largest noses known to man, and it is for this reason that he is reluctant to declare his love for the beautiful Roxanne. This, however, does not prevent Cyrano from helping his handsome but somewhat cloddish friend Christian win Roxanne's hand, simply by surreptitiously feeding flowery dialogue to Christian while the latter pitches woo. Cyrano was produced by the busy Hanna-Barbera studios.

There are no critic reviews yet for Cyrano. Keep checking Rotten Tomatoes for updates!

There are no featured reviews for Cyrano at this time.