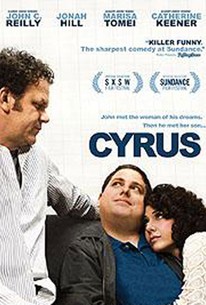 Critics Consensus: While it may strike some viewers as slight, Cyrus is a successful hybrid of mainstream production values and the mumblecore ideals of directors Jay and Mark Duplass.

Critics Consensus: While it may strike some viewers as slight, Cyrus is a successful hybrid of mainstream production values and the mumblecore ideals of directors Jay and Mark Duplass.

Critic Consensus: While it may strike some viewers as slight, Cyrus is a successful hybrid of mainstream production values and the mumblecore ideals of directors Jay and Mark Duplass.

Directed by mumblecore stalwarts Jay and Mark Duplass, Cyrus stars John C. Reilly as John, a middle-aged lonely divorced guy who, as the film opens, gets dragged to a party by his remarried ex-wife (Catherine Keener) -- who remains his best friend. After a few clumsy, drunken passes at a variety of women, John encounters Molly (Marisa Tomei), an attractive single-mom who finds John's social awkwardness appealing. They hit it off, and quickly begin a tender new relationship. Problems soon arise in the form of Cyrus (Jonah Hill), Molly's twentysomething son, who has an off-puttingly close relationship to his mom. Soon the jealous Cyrus sets about trying to break them up, and John must figure out how to deal with this unhinged and unexpected rival.

Charlie Brewer
as Stranger at Reception

The potentially one-joke premise is given depth, complexity, darkness and pathos by the offbeat execution and the honest performances.

Cast and crew seem committed to making a simple point: "unhealthily close" relationships can be enriching. And the result is a movie that feels both small and deep.

It's funny, but edgy, too: you feel as if something very bad could happen at any moment.

The Duplass brothers enter the mainstream with a touching, original and supremely funny film.

There are very few films, of whatever type, that actually surprise us, so when one does come along it's tempting to whoop.

The drama replaces the humor a little too often, creating a more serious, gloomily realistic atmosphere that goes against the initial comedic roots.

Cyrus is a cinematic beast all its own.

Cyrus is a funny and observant movie.

Wherever it goes, it is excessively drab for a movie set in LA-a peach nightgown Tomei wears is the same color as her skin and the walls at her place-but it lacks the mortifying intensity of an Elaine May movie, which it at times seems to be going for.

It offers you a look at a totally dysfunctional relationship that allows you to look at the relationships in your own life and breathe a sigh of relief.

A man battles with his girlfriend's son in this realistic, understated comedy filled with the awkwardness of real life.

First Review of 2012 "Cyrus": The fantastic ensemble really give off the feeling that they genuinely are a disfunctional family because of amazing chemistry with eachother and still manage to bring some laughs with it. The Duplas' have created a smart and believable movie with a simple yet entertaining central idea.

The Duplass Brothers, show a good film with a good screenplay and direction. A unexpected film, funny and entertaining. Fresh.

Not what I expected (I mean you see John C Reilly and Jonah Hill on a DVD cover you kind of expect a comedy), and while this was funny in a black way, it was not the type of funny you would necessarily expect. This was quite a twisted little story about what happens when you date a woman who is too close to her adult son. Marisa Tomei and Jonah Hill are kind of creepy in the inappropriate closeness they share (even an implied shared shower), but she's attractive and he seems friendly, so it's put down to quirkiness. Soon turns out the son is quite disturbed... Nicely acted movie, I enjoyed it, and there were a few laughs, though it was a more serious topic than I anticipated. Don't watch it looking for laughs, but if you like something a little deeper and out of the normal, this could be for you.