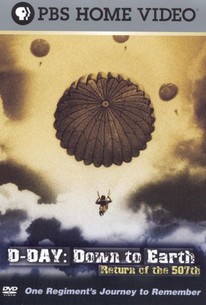 Directed by Phil Walker, this documentary recounts the actions of the 507th Parachute Infantry Regiment throughout World War II. Though the regiment would fall into obscurity after the culmination of the war, their role in battle was integral. They played an invaluable part in the famous Battle of the Bulge and participated in a massive air assault widely considered to be one of the deciding factors in the fall of Nazi Germany. The story is told by veterans, while author and research historian Martin K.A. Morgan offers a historical context. The vets have rejoined their ranks after many years apart, and hope to honor the fallen men while establishing their own legacy for generations to come.

Critic Reviews for D-Day: Down to Earth---Return of the 507th

There are no critic reviews yet for D-Day: Down to Earth---Return of the 507th. Keep checking Rotten Tomatoes for updates!

There are no featured reviews for D-Day: Down to Earth---Return of the 507th at this time.