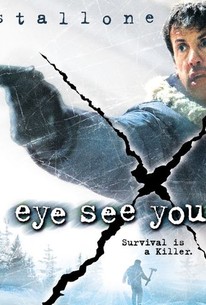 Critics Consensus: Whether it's being presented as D-Tox or Eye See You, this Stallone starring vehicle is a slapdash thriller to actively avoid.

Critics Consensus: Whether it's being presented as D-Tox or Eye See You, this Stallone starring vehicle is a slapdash thriller to actively avoid.

Critic Consensus: Whether it's being presented as D-Tox or Eye See You, this Stallone starring vehicle is a slapdash thriller to actively avoid.

Sylvester Stallone returned to the screen after a three-year absence (excepting his voice work in Antz) with this tense and violent psychological crime thriller. FBI agent Jake Malloy (Stallone) has been traumatized by an especially vicious murder. No longer able to perform his job, Malloy is referred to a clinic for members of the law enforcement community, run by doctors Hank (Tom Berenger) and Doc (Kris Kristofferson). Jake begins receiving therapy for post-traumatic stress disorder, but crime follows him inside the clinic; a serial killer has invaded the facility and is killing off the patients one by one, in increasingly gruesome ways. Soon Jake must set aside his fears and track down the murderer, before he becomes the next victim. D-Tox (which, in production, was publicized under the titles Detox and The Outpost) was released on video as Eye See You. ~ Mark Deming, Rovi

Courtney B. Vance
as Jones

Ian Gschwind
as Paramedic
View All

That a serviceable thriller like this struggles to get a release, when certain nameless dross gets rushed into cinemas is, frankly, bewildering.

This killer-chiller isn't preposterous enough for laughs and is too sloppily directed and scripted to scare or surprise.

This formulaic chiller will do little to boost Stallone's career.

Surely this is it for Sylvester Stallone.

A boring, formulaic mix of serial killers and stalk'n'slash.

One of those films that sat so long on the studio shelf that a maid had to periodically drop by to sweep off the cobwebs.

[A]midst the unwashed masses of direct-to-video tripe, it's a gem.

A surprisingly effective variation of the Ten Little Indians theme. Stallone's actually pretty good in this one.

A guilty pleasure at best, and not worth seeing unless you want to laugh at it.

So we got Ten Little Indians meets Friday the 13th by way of Clean and Sober, filmed on the set of Carpenter's The Thing and loaded with actors you're most likely to find on the next inevitable incarnation of The Love Boat.

Best described as I Know What You Did Last Winter.

This film gives us a murder/mystery rather than an action film. Sylvester Stallone is good in the lead role experiencing a wide range of emotions. It's one of his better performances in recent years. Of the supporting roles, Robert Patrick stands out as well as Christopher Fulford, Charles S. Dutton, Robert Prosky, Courtney B. Vance, Angela Alvarado and Stephen Lang. Tom Berenger hardly has anything meaningful to do and is wasted here.

The first 20 minutes of D-Tox seem like the end to another film. It's the climax where the serial killer finally targets the protagonist. After those 20 minutes the film begins to show the aftermath of such events. Unfortunately, rather than being an in depth drama, the aftermath is a slasher movie scenario. A group of cops enter a D-Tox center, each one has character traits, instantly recognizable to the genre. The mystery is revealed at a steady pace and I didn't guess the culprit. I also liked Dutton's small scenes away from the action. He was like Scatman Crothers in The Shining. Stallone gives a very decent performance, handing the high emotion at the beginning and the action and thrills. Certainly more enjoyable than it's box-office intake would indicate.

Sly plays a cop who checks into rehab. Soon each of the patients are murdered one by one.