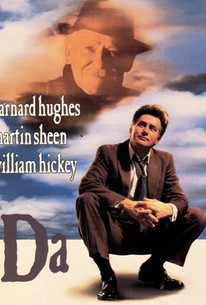 Charlie (Martin Sheen) deals with the death of his Irish immigrant father in this wistful drama. Barnard Hughes reprises his stage role of Da for the film version, with Doreen Hepburn as his wife. Time shifts from Charlie (Karl Hayden) as a youth to the present where he prepares to fly to Ireland for the funeral. Although both parents are gone, the adult Charlie's vivid memories of them and his childhood unleashes a wave of grief.

Marcus Colley
as Priest
View All

It is almost impossible, seeing this film, not to think of your parents in a new light, as people who, amazingly, did not have all of the answers and did not even know some of the questions.

A heart-affecting look at a challenging father- son relationship.

There are no featured audience reviews yet. Click the link below to see what others say about Da!