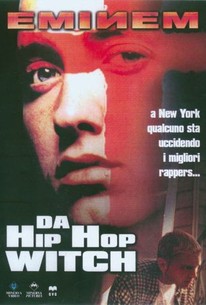 Rap musicians find something new to be afraid of in this hip-hop-themed parody of The Blair Witch Project. A supernatural being known as "The Black Witch in the Project" is terrorizing some of the biggest names in rap music, and a number of performers fear for their lives -- so much so that The Street Don, an underground music tycoon, is offering a reward of $10 million to whoever can find and capture the witch. As The Street Don presents daily television reports on the witch's latest victims, everyone who can scare up the courage (and needs the money badly enough) hits the streets looking for the she-demon, while a number of rappers discuss their own horrifying encounters with the Black Witch. Da Hip Hop Witch features appearances by top-selling recording artists Eminem, Mobb Deep, Pras, Ja Rule, Vitamin C, Killah Priest, Spliff Star, and Vanilla Ice.

Vanilla Ice
as Himself

Dale Resteghini
as Will Hunting

Rah Digga
as Herself

La the Darkman
as Street Don

Namakula the Goddess
as Isabel

Spliff Star
as Himself

Beverly Peele
as Herself

Hell Razah
as Himself

Royce Da 59
as Himself

Killah Priest
as Himself

Professor X
as Himself

Ja Rule
as Himself

Charli Baltimore
as Herself

Deuce Dutch
as Himself

Dani Girl
as Herself

Ill One
as Himself

Chris Simmons Jr.
as Himself

Northstar and DeNiro
as Themselves

Eric Rhea
as Himself

Lord Jamar
as Himself

Lidu Rock
as Himself
View All

Considering it was "written" (as it were), produced and directed by a white guy, I move to declare Da Hip Hop Witch officially a hate crime.

Nothing more than an amateurish publicity stunt intended to sell records.

There are no featured audience reviews yet. Click the link below to see what others say about Da Hip Hop Witch!