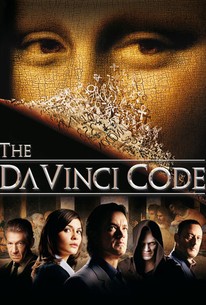 Critics Consensus: What makes Dan Brown's novel a best seller is evidently not present in this dull and bloated movie adaptation of The Da Vinci Code.

Critics Consensus: What makes Dan Brown's novel a best seller is evidently not present in this dull and bloated movie adaptation of The Da Vinci Code.

Critic Consensus: What makes Dan Brown's novel a best seller is evidently not present in this dull and bloated movie adaptation of The Da Vinci Code.

The murder of a curator at the Louvre reveals a sinister plot to uncover a secret that has been protected since the days of Christ. Only the victim's granddaughter and Robert Langdon, a famed symbologist, can untangle the clues he left behind. The two become both suspects and detectives searching for not only the murderer but also the stunning secret of the ages he was charged to protect.

Garance Mazureck
as Sophie at 13 Years

Daisy Doidge-Hill
as Sophie at 8 Years

By the end, the film degenerates into wishy-washy relativism of the school that says "the only thing that matters is what you believe", a real cop-out after the hectic Grail quest preceding it.

What seems credible on page is ludicrous in action.

Completing the trail of cryptic clues simply becomes an end in and of itself -- think Sudoku: The Movie -- with little in the way of whimsy, star chemistry or excitement to enliven the dour plod.

Even as a visual aid, The Da Vinci Code is a deep-dyed disappointment. Paris by night never looked murkier.

If you take this stuff seriously, one way or another, you're sure to be duped. You've got to hand it to Mr. Brown: So dark the con of man, indeed.

It is foremost moviegoing entertainment - and only secondarily a condemnation of religious fanaticism.

Unwieldy scripting has the usually nimble Hanks tied down by tonnes of tongue-twisting expository dialogue.

Exaggerated and absurd at all levels. [Full Review in Spanish]

An entertaining thriller with a solid cast and some genuinely intriguing moments.

The failures of Howard's performance does not ruin an unstoppable entertainment that does not give rest and that takes the viewer on a journey in perpetual motion. [Full Review in Spanish]

When it comes to mysteries, it really does boil down to how interesting your film is. While The DaVinci Code is the definition of a film that you either choose to buy into or you will probably hate it, I still find that its intentions are in the right place and holds onto its audience from beginning to end. Viewing this film ten years ago upon its initial release and just now revisiting it for the first time since, I still acquired most of my sentiments. This is an overly religious film and although some may admire its acts, most of those who are not of the Catholic religion may just find it pretentious or uninteresting. Personally, I believe the film has a little for everyone. That being said, although I think The DaVinci Code tries very hard to be intriguing, it definitely is not without its major flaws. While I have not read the source material that this film bases its premise around, I never choose to compare. A film needs to work as a film first and foremost and if it happens to be a faithful adaptation on top of that, then it just pleases more people, plain and simple. For me, even if I have read a novel, I hardly ever draw comparisons. Following a murder at the Louvre, novelist/symbologist Robert Langdon and the victim's granddaughter Sophie Neveu must uncover the clues to secrets he left behind. From secrets locked away since the birth of Christ to uncovering the lies of their past, this film sends viewers on a roller-coaster ride of intense puzzles. That being said, the film as a whole does not live up its exciting premise. While many people may not quite fully understand what I mean by this, I can't help but call this film calming and nice to watch. There is a fine line between boring and calm, but I feel that this film walks in between those perfectly. The pacing of this film, along with the very enjoyable performances from Tom Hanks, Audrey Tautou, and Ian McKellan, are really something to admire here. Sadly, there are moments when these aspects tarnish themselves by focussing too much on the surreal, quickly making this film feel a little less believable than it should be. The big reveal in the final act will either have you chuckling or simply accepting it. Without getting into spoilers, there is a build-up as to who or what something is and if it even still exists. When it is revealed, it felt a little forced and the film lost me. Again, the pacing saves those aspects, due to the fact that it takes itself very seriously and the performances are believable. Ten years ago I would have strongly advised against seeing this film in theatres, but having time pass and revisiting this film after knowing what to expect and not enjoying it very much the first time around, I have come to respect this adaptation of The DaVinci Code. It is by no means a great film in any way, but it maintains its interesting elements throughout, masking the annoying side characters, the sometimes ridiculous plot, and the over-abundance of religion. I did admire some of the clever inclusions of the Catholic religion in order to make certain scenes more interesting, but when your entire film relies on a reveal that requires its audience to have certain beliefs, the film will definitely not please all audiences, and that aspect still remains to this day. All of that said, I do feel that this film gets better on multiple viewings The DaVinci Code still offers a generous amount of thrills and its mysterious aspects are still very enjoyable to watch. The film does get a little too self-indulgent with its beliefs, but if you are able to accept the fact that this film will not hold back, you may just find yourself enjoying it quite a bit. At 150 minutes, the film does feel its length due to its slow burn, but that is the aspect I admired most about this film. Its soothing performance from Tom Hanks, meshed with very intriguing dialogue throughout each scene when something is about to be revealed made me feel relaxed. For a specific audience, this film could possibly be the best film they have ever seen, but The DaVinci Code relies too much on that to carry the overall film. I did buy into the conclusion, but it was pretty silly. Overall, although I enjoy the film more upon each viewing, it really is nothing special in the end. It tries very hard to be great, and while certain aspects are exceptional, the film as a whole is fine. I find new things to like about this picture each time, so I may give it an even higher grade in the future.

The curator has been murdered at the Louvre in Paris. Robert (Tom Hanks) goes on an all night hunt for the truth. I loved Dan Brown's book. Slightly disappointed by this adaptation. Too short and not enough detail.

Only took me 3 years to finally get around to seeing this movie. In the end i was entertained and loved the intrigue, the fact that the church got all upset over this book just makes it worth it more. An all star cast kept the film going and Ron Howard as always gave me a solid show.