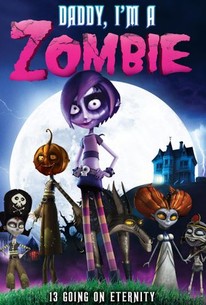 Dixie is a 13-year-old girl, unhappy with her life: five years ago her mother divorced from her father, a coroner, and in her college she is considered weird due to her gothic aspect. One night, Dixie suffers an accident when a tree crashes against her during a storm. Dixie wakes up later in the middle of a cemetery, turned in a zombie. With the help of Isis, an Egyptian mummy, and Gonner, a pirate zombie, Dixie tries to return to life, looking for Vitriol, a strange man who roams by the forest close to the cemetery. However, her search is followed by Negrida, an evil zombie witch who wants the Azoth, a mystical item which, according to the legend, will open the portal between the living world and the dead realm, giving Negrida the chance to accomplish her evil plans to invade the living world with her zombie armies.

There are no critic reviews yet for Daddy I'm A Zombie (Papá, Soy Una Zombie). Keep checking Rotten Tomatoes for updates!

There are no featured reviews for Daddy I'm A Zombie (Papá, Soy Una Zombie) at this time.