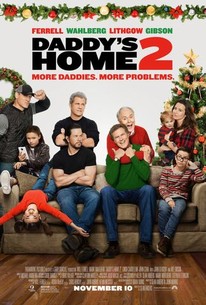 Critics Consensus: A formulaic comedy that's unlikely to spread much yuletide merriment, Daddy's Home 2 can only muster a few stray yuks from its talented cast.

Critics Consensus: A formulaic comedy that's unlikely to spread much yuletide merriment, Daddy's Home 2 can only muster a few stray yuks from its talented cast.

Critic Consensus: A formulaic comedy that's unlikely to spread much yuletide merriment, Daddy's Home 2 can only muster a few stray yuks from its talented cast.

Dusty (Mark Wahlberg) and Brad (Will Ferrell) have joined forces to provide their kids with the perfect Christmas. Their newfound partnership is put to the test when Dusty's old-school, macho Dad (Mel Gibson) and Brad's ultra-affectionate and emotional Dad (John Lithgow) arrive just in time to throw the holiday into complete chaos.

Will Ferrell
as Brad Whitaker

Didi Costine
as Adrianna
View All

Gibson could scarcely hope to play a character more like himself if he landed the lead in The Mel Gibson Story.

The best that can be said for Daddy's Home 2 is that it's slightly less awful than its recent female-led counterpart, A Bad Moms Christmas.

A cynical, synthetic piece of Hollywood production line tat, which reheats the narrative leftovers of an already mediocre domestic comedy about blended families.

This can be a moderately successful film until Mel Gibson shows up and opens his mouth. Or even just smiles.

Daddy's Home 2 is a family film only in the sense that it concerns a family. (It is, in that sense, like the Texas Chain Saw Massacre).

It's a basic rule of entertainment - seemingly ungrasped here - that when Mel Gibson is laughing at something, you are probably not.

...a milquetoast artifact of antiquated social norms, choosing to mock the notion of blended families while claiming to be empathetic to them.

Even the kids are subjected to humiliation here.

While a lighter touch might have actually made great strides in making these characters appear to act like functioning human beings, instead the movie repeatedly goes for the obvious, cheap laugh, rarely resulting in actual laughter.

It's every bit as silly as the first but slightly better thanks to the addition of Mel Gibson and John Lithgow.

Gibson and Lithgow make terrific foils for Farrell and Wahlberg, and their presence provides a major boost for an otherwise mid-grade comedy.

A wacky holiday family comedy, Daddy's Home 2 delivers some good laughs. When they discover that their daughter is unhappy about having two separate Christmases, Brad and Dusty decide to have one big Christmas with the whole family (parents and step-parents); but things get complicated when their own fathers decide to visit for the holidays. Mel Gibson and John Lithgow make for great additions to the cast and prove to have good comedic chemistry with Will Ferrell and Mark Wahlberg. And the humor mixes satire and physical comedy fairly well; though Ferrell's broad slapstick goes a little too far at times. Also, the plot is pretty formulaic and uses a lot of rather cliched tropes. Yet despite a few weaknesses, Daddy's Home 2 is an entertaining Christmas film.

This is a dull and very boring film that never attempts to rise above the low standards of the first film. Ferrell has become a forced comedian, he just never looks at home in this film and the comedic moments are too predictable. The trailer has the best moments and work better than this film, the creative team behind the scenes are not comfortable with the material. Sean Anders has not transitioned comfortably to directing, the films are mostly mean spirited and unfunny. Sanders adopts some odd style of characters laughing at moments, when they aren't that funny. The glossy filmmaking style might look good but it means zero when you can't even muster a legitimate laugh with content. The cast is wasted and this is one film that did not need to be made, the characters don't evolve over the film, essentially robbing the film of anything resembling an arc. This is studio filmmaking 101 and needs to be abolished from todays films, there is no need for such a boring film to exist and it wastes the talents of each actor. I'm sure they were paid ridiculous amounts of money to be here but the target audience deserved more here, like the first film as well. This is bad filmmaking and not worth the viewing, any moment one of the actors is doing something, every crowd member watches in anticipation e.g. the first kiss. 17-02-2018.

There's not much that's original in this stab at comedy, and I say "stab" because it feels as if they're trying to kill it, and trying, and trying. It's a Christmas family holiday entry, and so it plays to that demographic, with 'the parents watching over children aesthetic' like a towel rag the family dog won't release. It's aims for "cute" and begrudgingly earns "very nearly so."