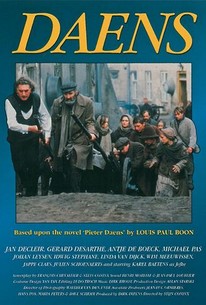 This Academy Award-nominated Belgian drama follows a late 19th-century priest's courageous battle to end the exploitation of child workers in Aalst, Belgium. Father Daens' crusade begins shortly after he is transferred to the impoverished Belgian region. Aghast at the working conditions he sees in area mills, Daens publishes an inflammatory letter in his brother's newspaper. Among his many accusations and condemnations are those that not only children such as the little girl Nini are being overworked in unhealthy conditions, they are also being sexually abused by supervisors. The workers launch a widespread public outcry that is immediately quelled by the upper-class mill owners who fire all rebels and hire more children and women (at even lower wages) in their place. Thus begins a long, tragic battle between Daens and the poor and Belgium's ruling class. Aided by the Church itself, the monarches and the rich prevail, leaving Daens disillusioned and just as impoverished as those for whom he has sacrificed everything.

Ludwik Benoit
as Man with Handcart

Daens restores our prejudices about Belgian cinema: it's long, worthy, and a bit dull.

Blegium's Oscar nominee is a worthy historical drama about the involvement of priests in the labor movement.

There are no featured reviews for Daens at this time.