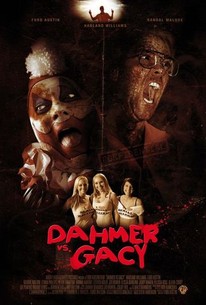 A clandestine government project to create the ultimate killing machine proves more successful than Uncle Sam could have ever imagined in this gory, gonzo horror comedy from director Ford Austin (The Curse of Lizzie Borden). Somewhere in a top-secret government laboratory, scientists have successfully used DNA to revive notorious serial killer's Jeffrey Dahmer (Austin) and John Wayne Gacy (Randal Malone). But the project backfires when the two maniacs make a daring escape, and commence carving a bloody swath across the entire country. Now, the only man who can bring this murder spree to an end is hard-drinking, shotgun-wielding hillbilly mercenary Ringo (also Austin), who takes his orders directly from God (Harland Williams). But just when Ringo thinks he's got a beat on Gacy and Dahmer, a band of ninjas and a super-human butcher (Ethan Phillips) turn this brutal showdown into an all out bloodbath.

Critic Reviews for Dahmer vs. Gacy

There are no critic reviews yet for Dahmer vs. Gacy. Keep checking Rotten Tomatoes for updates!

Audience Reviews for Dahmer vs. Gacy

There are no featured audience reviews yet. Click the link below to see what others say about Dahmer vs. Gacy!