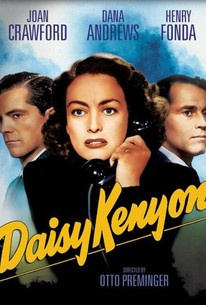 Daisy Kenyon stars Joan Crawford as the eponymous heroine, a Manhattan commercial artist. Daisy is torn between two men: a handsome, married attorney (Dana Andrews) and an unmarried Henry Fonda. Deciding to do the "right thing", Daisy marries Fonda, but carries a torch for the dashing Andrews. When the lawyer divorces his wife, he calls upon Daisy and tries to win her back. She is very nearly won over, but her husband isn't about to give up so easily. Both men argue over Daisy, who is so distraught by the experience that she nearly has a fatal automobile accident. In the end, Daisy realizes that she truly loves Fonda, and gives Andrews his walking papers. Daisy Kenyon is given a contemporary slant with a subplot about child abuse (in a Joan Crawford film!); and, in one scene set at New York's Stork Club, several celebrities (Walter Winchell, Leonard Lyons, John Garfield) make unbilled cameo appearances. ~ Hal Erickson, Rovi

John Garfield
as Man in Restaurant

Leonard Lyons
as Himself

Rarely have love and madness seemed so fruitfully allied.

Fairly recently, Otto Preminger's Daisy Kenyon has been starting to get some of the acclaim and attention it deserves.

At the beginning of Daisy Kenyon, Joan Crawford is the sane one.

A scrupulously cooled romance and a portrait of a postwar nation, but first and foremost a fluid chart of thorny personal spaces brushing against each other

Though one of Preminger's weaker films, it's still interesting to watch as a sampler of the woman's picture and star vehicle for Joan Crwaford.

The women's pic is given a far better treatment than it deserved.

My God, there's another one. Another wonderful Joan Crawford movie that has been completely forgotten. I've lost count now of how many I have found. "Daisy Kenyon" from director Otto Preminger may have a bad title, but it's an interesting film. It's a serious drama looking at the complexities of the human heart. Crawford plays a woman in love with a married man (Dana Andrews). Whereas most 1940s films took a melodramatic approach to this subject matter, "Daisy" never becomes a weepie. It looks relatively deeply into its characters to examine their struggles. It wrestles in a very adult way with the complexities of imperfect marriages. Made just after World War II, the film includes Henry Fonda as a somewhat shell-shocked vet trying to reintegrate into domestic life, feeling just a bit off-kilter. Fonda's lonely, disoriented character provides wonderful added dimensions that compassionately consider the plight of a million young men trying to deal with inner demons while acting as normal as possible. Why has a movie with so much intelligence and heart been so forgotten? I suspect that that "Mommie Dearest" thing did irrevocable damage to Crawford's reputation. Americans can't see her anymore without thinking of that. It's too bad. She may have been a monster at home. But she had an extraordinary movie career and made a stunning array of films that were wonderful.

Average drama with Joan emoting all over the place, Andrews and Fonda are an interesting contrast. One of the last times Crawford played a feminine character without the veneer of tough ballbuster that became her stock in trade as she aged.

Daisy Kenyon is to film noir what The Wizard of Oz is to horror films. Sure, there are some noirish elements, but this is far more about sin than it is about crime. This is about two bulls (Dana Andrews and Henry Fonda) posturing for a battle over a cow (guess who?). And for what? The winner gets to sleep with Joan Crawford??? That's the big grand prize??? Personally, I'd rather share a sleeping bag with Truman Capote.

A pretty good romantic drama with a good cast, but it could be better.