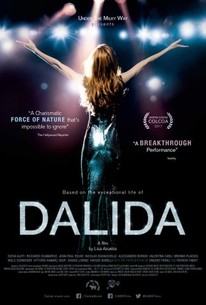 DALIDA is an intimate portrait based on the real story of a strong, fiercely independent woman whose 30-year dazzling career was punctuated by tragic events, with no less than three of her lovers committing suicide. With over 170 million albums sold and twice honored with the "World Oscar of Recording Success", Dalida received more than 70 gold records and was the first singer to receive platinum and diamond discs. Dalida continued to hold concerts until her last days, but her suicide in 1987 immortalized her iconic image as a diva and renowned singer. The film takes us on a journey from her difficult childhood as an Italian in Egypt during WWII all the way to the summits of stardom and through her final moments. It will give Dalida fans an unprecedented opportunity to witness some of the most important moments of the life and career of one of the most modern, liberated, and talented women of the 20th century.

A sentimentalized, shallow biopic that looks and sounds better than it is.

Despite running just over two hours, there is almost no sense of who Dalida was beyond the private lover and the public performer.

One has to wonder who Dalida is even for, as it seems wholly disinterested in exploring Dalida as a character or celebrating her legacy as a musician.

Dalida is one of those biographies that transcends the artist on screen and gives the viewer much more than a peep into her life; it gives them a full view of how she was, who she was, of her feelings, and what led to her becoming such an icon ...

American audiences, at least, can be excused for muttering "I don't get it" after watching this strained, dull and charisma-starved portrait of the international singing sensation.

Dalida stands as a stinging commentary on the female identity and the public's insatiable demands for more from their idols. It's absolutely phenomenal.

The impeccable direction, dynamic editing and magnetic performance by the stunning Sveva Alviti compensate for a script that deserved a bit more polishing, even though it is efficient in the way it uses Dalida's songs to organically comment on episodes of the character's tragic life.