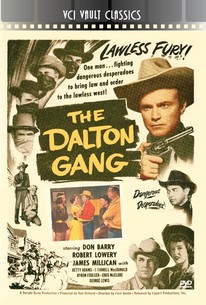 Western star Donald Barry was both producer and leading man of The Dalton Gang. Barry is cast as straight-arrow marshal Larry West, who braces himself against an invasion by the notorious Daltons. He is backed up by sheriff Jeb Marvin (James Millican), while Polly (Betty Adams) waits tensely on the sidelines (Adams would later enjoy considerable success under her new nom de film of Julie Adams). When the much-anticipated showdown comes, West and Marvin receive unexpected aid from a friendly Indian tribe. Curiously, none of the actors playing the Daltons are afforded screen credit: in fact, except for a few long shots, they're barely in the film.

Critic Reviews for The Dalton Gang

There are no critic reviews yet for The Dalton Gang. Keep checking Rotten Tomatoes for updates!

There are no featured reviews for The Dalton Gang at this time.