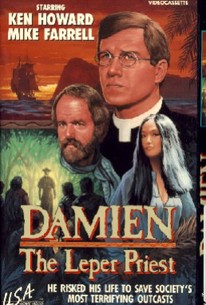 More formally known as Father Damien: The Leper Priest, this made-for-TV biopic stars a heavily-wigged Ken Howard in the title role. Father Damien was a Belgian priest who, in 1873, was assigned a far-from-desirable congregation: the leper colony of Molokai in the Hawaiian islands. At first appalled by the colony and its denizens, Damien devoted his life to administering to their needs and improving their living conditions. He died in 1889 at the age of 49, having long earlier contacted leprosy himself. When originally telecast October 27, 1980, Damien: The Leper Priest was dedicated to the memory of David Janssen, who before his death was slated to portray Father Damien.

There are no critic reviews yet for Damien: The Leper Priest. Keep checking Rotten Tomatoes for updates!

There are no featured audience reviews yet. Click the link below to see what others say about Damien: The Leper Priest!