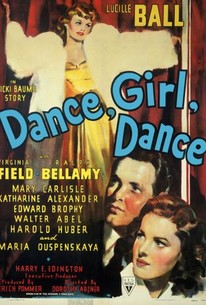 This 1940 dramedy involves an ambitious ballet dancer (Maureen O'Hara) forced to find work at a burlesque house. While there, she competes with a stripper (Lucille Ball) to win the love of a ladies' man (Louis Hayward).

Ernest Truex
as Bailey No. 1

Chester Clute
as Bailey No. 2

Sidney Blackmer
as Puss In Boots

Vivian Fay
as The Ballerina

Paul Phillips
as Reporter
View All

What To Watch During TCM’s Trailblazing Women

Arzner films it with fascination and enthusiasm, and the choreography is marked by the point of view of the spectators and the dancers' awareness that they're being watched.

The themes are female friendship and a woman's fulfillment, and it is one of Arzner's most coherent and accomplished films.

Arzner's internal critique of Hollywood ideology (woman as silent object of male scrutiny). It works within the confines of a stock vaudevillian golddiggers comedy-drama.

Dance, Girl, Dance is just a cliché-ridden, garbled repetition of the story of the aches and pains in a dancer's rise to fame and fortune.

With this release and its wonderful supplemental interviews, an opportunity is created to shed some light on a forgotten director and her work.

Not surprisingly, the scene where O'Hara's character directly lambasts an audience for its collective "male gaze" retains its topicality.

Without rising out of the cinematically conventional, the movie's self-reflexivity continually questions the gaze of the camera.

This jaunty RKO musical... was directed by Dorothy Arzner, and has been reclaimed over the years as a film of relevance to the feminist movement.

Pioneering female director Dorothy Arzner, who took over at short notice after filming commenced, does her best with an inadequate script and a miscast O'Hara; she manages to bring the film to life from time to time -- usually when Ball is on screen.

As a piece of Hollywood history, the film's worth seeing, but it's no unsung masterpiece.

Arguably Dorothy Arzner's most personal film, this chronicle of female friendship is an anomaly: a feminist film made before feminism existed, directed by Hollywood's only female director, and a buddy picture before the genre was invented.

Awesome movie, Lucille Ball like you never seen her before. This was made before she started playing the stupid housewife of Ricky Recardo. Her acting is over the top in this movie. 4 1/2 stars 12-5-12

Dorothy Arzner is often remembered (and rightfully so) for her bravery -- the only regularly employed female director during the Golden Age, the first woman to join the Directors Guild of America, and the first feminist filmmaker some 30 years before it became a social issue -- but Dance, Girl, Dance, her most personal film, follows an almost identical trajectory: a critical and commercial failure that lost a pre-Citizen Kane RKO a crippling amount of money, only to be reclaimed over the years as a film of relevance to the feminist movement. Dance, Girl, Dance is a milestone in the dance film and musical, despite its B-movie production values (featuring lots of back projection). Key sequences which demand critical attention include Judy's (Maureen O'Hara) attempt to be a hula dancer, stunningly upstaged by the sexy wiggles of Bubbles (a pre-I Love Lucy Lucille Ball), and the burlesque routine which gives Bubbles her biggest chance to shine, "Mother, What Do I Do Now?" Hollywood also shows us classical ballet, with an extended routine choreographed by Steve Adams (Bellamy) - relying on the assumption that classical ballet/high art is not as appealing as good old low-down burlesque, regardless of how much money and talent is thrown into the "art" pot. While it may have made use of the resources from Fred and Ginger's RKO musicals, the ballet sequence looks flat against the earthy sexiness of Bubbles' hula dance. Judy's most stunning set piece, a speech near the end berating the men who go to watch strippers on the burlesque stage, could be considered as a barbed attack on the movie audience - after all, part of the Hollywood myth was the objectification of women, and despite Arzner's input, Dance, Girl, Dance is as guilty of this as any other film of the period. The film could be classed as high camp, but it has much more to offer than this implies. Although Arzner's experience with musicals was limited, she ensured the film was tightly directed and gave the finished product considerable power. However, this art vs. commerce mediation was her penultimate film. It succeeds because of its sheer charm and attention to detail; we can understand perfectly how it feels to sleep in a room of the type rented to chorus girls, how seeing a ballet performance can fuel the ambitions of one of their number. It is also a kind of fairytale where Judy is the good princess and Bubbles the wicked witch, although the ending isn't brought about by masculine intervention, but by sheer determination and self-faith.

Lucy tears it up as Bubbles but the rest of the film is bland.