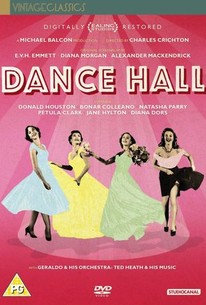 Just before directing the comedy classic The Lavender Hill Mob, Charles Crichton dashed off the romantic melodrama Dance Hall. The story takes place in a London dance emporium, frequented by the local working girls. Natasha Parry stars as Eve, whose marriage to Phil (Donald Houston) is imperiled when she takes a different partner for an upcoming dance contest. Her reasoning is that Phil is a lousy dancer, but she loves him all the same; Phil, however, is the jealous type, who doesn't quite see things Eve's way. Among the familiar faces floating by in Dance Hall are Bonar Colleano, Diana Dors, and Petula Clark (yes, her career went back that far). ~ Hal Erickson, Rovi

The story is conventional and shapeless, while the sub-plots are merely incidents.

There are no featured reviews for Dance Hall at this time.