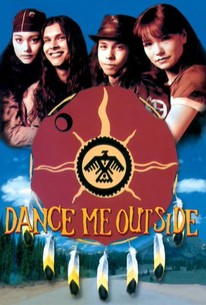 Dance Me Outside Photos

This Canadian drama based on a book by W.P. Kinsella, examines the tension between Indians and Anglos in Canada from an Indian perspective. Silas Crow, who lives on a Northern Ontario reserve, wants to take a mechanic's course in Toronto with his friend Frank Fencepost. But before he can enroll, the teen must write a short narrative describing his home. The film is a series of vignette's from Crow's narrative. The vignette's are alternately funny and poignant.

Gloria May Eshkibok
as Mad Etta

Leslie Tabobondung
as Clifton
View All

Critic Reviews for Dance Me Outside

Filled with characters who are more frustrated than ennobled, Dance Me Outside deftly turns a number of narrative conventions upside down.

Dance Me Outside nevertheless stays compelling, thanks to its cast of appealing unknowns. You haven't seen anyone quite like them before -- and that's meant as high praise.

Bolstered by a winning, youthful cast, the film is a droll ensemble piece that makes its serious points skillfully and effortlessly.

[Dance Me Outside] packs a lot of punch into an offbeat drama that at first appears to be headed nowhere. Ultimately, though, you feel involved in lives that end up touching home.

Dance Me Outside offers an inside look at a culture that, all too often, has been either ignored or portrayed with halo-wearing political correctness.

The weaknesses are compensated for by Kinsella's fresh characterizations and Dance Me Outside's fine performances.

Such an odd start gives one hope. But, sadly, nothing as imaginative happens again.

Audience Reviews for Dance Me Outside

HILARIOUS! Absolutely brilliant! Loved Adam Beach in this one. One could not help but feel for Michael Greyeyes's character. Oohh!!

Dance Me Outside Quotes