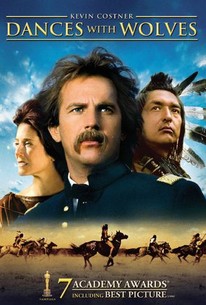 Critics Consensus: Dances with Wolves suffers from a simplistic view of the culture it attempts to honor, but the end result remains a stirring western whose noble intentions are often matched by its epic grandeur.

Critics Consensus: Dances with Wolves suffers from a simplistic view of the culture it attempts to honor, but the end result remains a stirring western whose noble intentions are often matched by its epic grandeur.

Critic Consensus: Dances with Wolves suffers from a simplistic view of the culture it attempts to honor, but the end result remains a stirring western whose noble intentions are often matched by its epic grandeur.

A historical drama about the relationship between a Civil War soldier and a band of Sioux Indians, Kevin Costner's directorial debut was also a surprisingly popular hit, considering its length, period setting, and often somber tone. The film opens on a particularly dark note, as melancholy Union lieutenant John W. Dunbar attempts to kill himself on a suicide mission, but instead becomes an unintentional hero. His actions lead to his reassignment to a remote post in remote South Dakota, where he encounters the Sioux. Attracted by the natural simplicity of their lifestyle, he chooses to leave his former life behind to join them, taking on the name Dances with Wolves. Soon, Dances with Wolves has become a welcome member of the tribe and fallen in love with a white woman who has been raised amongst the tribe. His peaceful existence is threatened, however, when Union soldiers arrive with designs on the Sioux land. Some detractors have criticized the film's depiction of the tribes as simplistic; such objections did not dissuade audiences or the Hollywood establishment, however, which awarded the film seven Academy Awards, including Best Picture. ~ Judd Blaise, Rovi

Mary McDonnell
as Stands With a Fist

Rodney A. Grant
as Wind in His Hair

Steve Reevis
as Sioux No. 1/Warrior No. 1

Sheldon Wolfchild
as Sioux No. 2/Warrior No. 2

James A. Mitchell
as Ray

Critic Reviews for Dances With Wolves

By never falling into the trap of allowing spectacle to supersede character, Costner's Dances with Wolves restores depth, idealism, poignancy and even wonder to a genre that had long seemed moribund.

It's an engrossing tale, and Costner directs with the confidence of a Hollywood veteran well aware that entertainment comes before earnestness.

This is a big picture in love with our landscape as much as with the Sioux Indians who inhabit it.

The important issues raised by the film- centered on the cultural, racial and moral struggle that took place on the American frontier-are glossed over in favor of a juvenile fantasy of male bonding around the campfire.

This collective array of talent has yielded a western that is at once original and traditional. Dances With Wolves looks back to the masterworks of the past and, with its relevance to our present, it deserves to be ranked with them.

A slow-moving but well-acted western.

It's a colossal journey of self-discovery, exploration, and education, rounded out with all of the elements of influential storytelling.

...in Costner's case, it appears genuine. With Dances with Wolves, he has reduced Hollywood formula to an elegant equation of truth and beauty.

[Dances With Wolves] packed with action, emotion, romance, laughter and an insight into a half-lost culture, is one heck of a beautiful movie.

It's still a wonderful time at the movies by turns, a grand adventure, a great inspiration, and a missing chapter In what it means to be human.

That's what people have always loved about Westerns -- the feeling of size which, in the age before radio, TV and the airplane, seemed the very nature of the country.

Audience Reviews for Dances With Wolves

Costner's half-hearted media apology to the Indian nation for the atrocities committed against them in the name of unrivaled, unapologetic, rapacious greed (for which the people of One Nation Under God have made good - not) makes for a nice pass of time even if the lead characters are ironically Caucasians (though adopted by Native Americans). My favorite sequence: the sweeping Remington inspired Buffalo Hunt.

Many people think the 1990 Oscar for Best Picture should have gone to GoodFellas; I might have preferred that also, but don't discredit this film for that reason. This is a great film! Along with 92's Unforgiven, Dances With Wolves revamped the Western genre, making it popular again. Nominated for 12 Academy Awards and winner of 7, this classic film is a must see!

Probably the best western made, only 'Mohicans' comes close to this and only 'Apocalypto' recently challenges it. This is a heart warming, emotional, tense and brutal look at life within an Indian tribe and how they try to exsist against the American military with the help of turned soldier Costner. The look and feel of the whole film is absolutely perfect, faultless, the musical score is one of the best and most moving in a film that I can remember whilst the acting is nothing short of perfect from virtually everyone involved including Costner. Nothing has really beaten this film in terms of accuracy and honesty, its amazing what they achieved, even the animals are sublime. Most of the film is in native tongue ('Apocalypto' beats this in the fact its all in native tongue which was darn impressive) and the locations used are actually the correct real historic locations, not many sets used. Its a perfect film, romance, action, courage, revenge, tears, its very much an emotional roller coaster, but well worth it, you must see this before you die, its an actual history lesson.