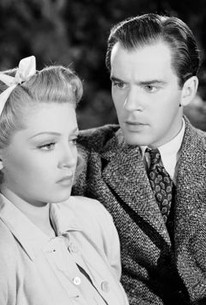 This MGM musical comedy has Lana Turner in her starring-role debut. She plays a talented young dancer who becomes the object of a phoney-baloney national screen test contest set up as a publicity stunt by a powerful press agent who wants to promote her in an upcoming film. Before the contest begins, the press agent has the girl enrolled in a Midwestern college where she is to be magically discovered and illicitly selected as the winner of the contest. A chaperone accompanies her while the press agent begins his nationwide "search." The trouble begins when a college newspaper editor at the girl's college begins suspecting monkey business and decides to do an expose. But he and the dancer have fallen in love. She tells him all about the scam, and he, wanting to protect her, has his buddies abduct her and hold her hostage until the contest is over. Meanwhile, the girl's chaperone goes on in her stead, and whatta-ya-know, wins the contest. The dancer, isn't upset though, because she has decided to accept the editor's proposal and stay where she is. Look closely for a young Veronica Lake, billed as Constance Keane, in a bit part. Artie Shaw and his orchestra provide the musical numbers. The film is also known as Every Other Inch a Lady.

Artie Shaw
as Himself

Mary Field
as Miss Jenny May

Laura Treadwell
as Dean of Women

Minerva Urecal
as Woman on Radio

Dick Winslow
as Couple on Motorcycle
View All

There are no critic reviews yet for Dancing Co-ed. Keep checking Rotten Tomatoes for updates!

Read the title and you know what to expect!