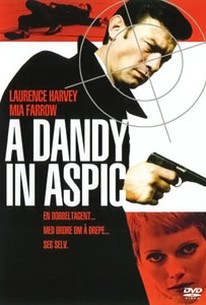 A Dandy in Aspic Photos

Director Anthony Mann's final film (Mann died during the filming, and the production was completed by the film's star, Laurence Harvey) is a kitchen-sink espionage drama with Harvey as Eberlin, a Russian spy and double-agent, homesick and pining for the Russian steppes. It is in this risky mood that Eberlin falls in love with the emaciated Caroline (Mia Farrow). Complications arise when he is directed to kill a Russian spy -- but the Russian spy happens to be himself. ~ Paul Brenner, Rovi

Per Oscarsson
as Pavel

Lockwood West
as Quince
View All

Critic Reviews for A Dandy in Aspic

Lionel Slander is wonderfully fat, jovial and malevolent as Harvey's Russian superior. But it is no use. The Aspic is bland.

Underrated spy thriller with many links to Anthony Mann's subjects and images.

Audience Reviews for A Dandy in Aspic

Solid cold war story with Harvey more engaged than usual in the lead.

A Dandy in Aspic Quotes