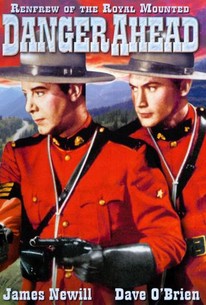 Renfrew of the Royal Mounted rides again in the Criterion/Monogram "northern" Danger Ahead. There's not a whole lot of plot to speak of, as Renfrew (James Newill) gets involved with a crooked banker (John Dilson) and his raffish henchman (Dick Rich). One of the film's plusses is the presence of comedienne Dorothea Kent as the heroine. Refusing to take herself or the plotline seriously, Kent is a breath of fresh air in the otherwise formula-bound proceedings. Also good for laughs is Al Shaw, formerly of the Shaw & Lee vaudeville team, as a wisecracking janitor.

Critic Reviews for Danger Ahead

There are no critic reviews yet for Danger Ahead. Keep checking Rotten Tomatoes for updates!

There are no featured reviews for Danger Ahead at this time.