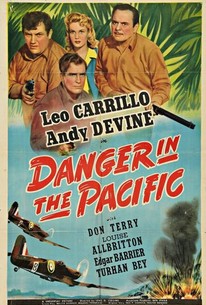 Don Terry's last leading-man assignment at Universal (save for his serial duties in Don Winslow of the Coast Guard) was the "B" actioner Danger in the Pacific. As usual, Terry is teamed with Leo Carrillo and Andy Devine, this time united by the common interest of an expedition through an uncharted Pacific island. Scientist-explorer David Lynd (Terry) leaves wealthy bride-to-be June Claymore (Louise Allbritton) at the altar to join photographer Andy Parker (Devine) and British secret service agent Leo Marzeli (Carrillo) in search of rare minerals. They soon run afoul of crooked trader Tagani (Turhan Bey), who's been busily stockpiling weapons in the hills on behalf of his Nazi partners. After a variety of hair-raising adventures (most of them courtesy of the Universal stock footage department), our three heroes foil the Nazis' plans for a surprise invasion of the South Seas.

Critic Reviews for Danger in the Pacific

There are no critic reviews yet for Danger in the Pacific. Keep checking Rotten Tomatoes for updates!

There are no featured reviews for Danger in the Pacific at this time.

Danger in the Pacific Quotes