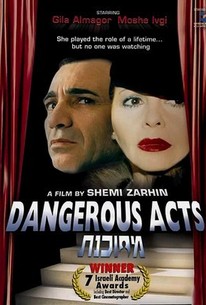 Winner of several awards in his own country, the Israeli director Shemi Zahrin weaves a psychological thriller with musical vignettes for dramatic relief in Mesukenet (Dangerous Acts), a film about loss of loved ones and revenge. Tzviya, a leading Israeli stage-star loses her husband, her only daughter -- who was pregnant at the time, and her son-in-law to a terrible accident when a truck goes out of control and hits their car. Three years after the tragedy the truck driver, Israel, gets out of jail and appears at Tzviya's house asking for forgiveness. The meeting of the two is highly charged with conflicting emotions and soon develops into a tearing and manipulative relationship. Tzviya refuses to forgive him, but Israel doggedly persists until he becomes desperate. Mesukenet was screened at the 1999 Festival of Films-Mumbai. ~ Gönül Dönmez-Colin, Rovi

I find mysterious depths of guilt and fear in Dangerous Acts that I cannot fully fathom.

There are no featured audience reviews yet. Click the link below to see what others say about Dangerous Acts!