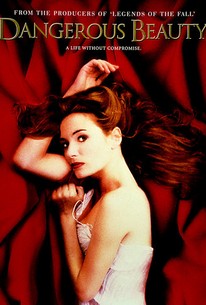 Marshall Herskovitz directed this look at life in 16th-century Venice, based on Margaret Rosenthal's 1994 book The Honest Courtesan. Positioned outside of the Venetian court, Veronica Franco (Catherine McCormack) hopes to rise above her station, but her interest in nobleman's son Marco Venier (Rufus Sewell) is blocked since his parents forbid their marriage. Following the path taken by her mother, Paola (Jacqueline Bisset), Veronica becomes a courtesan, finding this gives her a niche in the male-dominated society. When Vatican emissaries accuse her of witchcraft, she lashes back, using the trial as a feminist forum to expose the hypocrisies of the period. Filmed in 1996 in Venice and Rome with a variety of working titles (Courtesan, Venice, and The Honest Courtesan). ~ Bhob Stewart, Rovi

Emy Kay
as Courtesan
View All

Most movies are made by males and show women enthralled by men. This movie knows better.

Only McCormack manages to breathe any urgency into a tale that takes far too long to escape the fate of too many films set in Venice, in which San Marco and the Grand Canal's gondola fleet overwhelm story and characters.

By the time the end credits roll, though, Dangerous Beauty has become as trite and by-the-book as its title.

a fancy bodice-ripper with a political message

Like some ribald tale from the Playboy Channel but with most of the sex scenes edited out.

It's so morally WRONG... and yet strangely I found myself cheering for the courtesan... a sexually promiscuous girl who was refused the offer of marriage by the one she loved so she went into prostitution to spite her lover. Honestly, I don't know why I watched the whole thing. It had an interesting ending and I was surprised that it was based on truth.

I'd like to forewarn you at the very outset that my rating is biased. Besides, there might be an indirect SPOILER, though I've tried my best not to convey it or give anything away. But I'm not sure whether I've succeeded in it or not. Now here's a movie which has nothing new to offer. A mediocre for most of the part. Almost just another historical love story. If it weren't for the occasional interesting sequences in the middle of this love story, I don't know if I'd have made it till the end. Well, not at least in one sitting. So, you may be wondering why the heck four stars for such a movie? Well, I'd like to admit that my rating is based genuinely on the effect the ending of the movie had on me. I was expecting just the usual ending that one is supposed to expect from this kind of movies (okay, I didn't know the factual story on which this movie was based), but I was blown away by what it was. I can't remember having watched this kind of ending for a movie of this type. For a movie that proceeds in a mediocre way, this surely was a great achievement. And I'm glad that I made it till the very end. The confession speech could have been penned more fiery, though. While it was poetic, it wasn't fiery enough. (Strange coincidence that the last movie I watched was great all the way, but for its conventional ending. And here, it's the ending that made this movie so great for me!!!) The performances weren't quite up to the mark here, except for Oliver Platt (playing the role of Maffio Venier). Both the protagonists, Catherine McCormack & Rufus Sewell, were quite unimpressive. Naomi Watts seemed to be sleepwalking in her short role. Oliver Platt was incredibly great & made a mark in each frame he appeared. Despite of having liked the ending so much, I won't recommend it to anyone on the strength of its ending alone. Because let's face it, after all, it was nothing in the veins of 'The Sixth Sense' or 'The Others' that most of the people would appreciate. While I found the ending quite genuine, it might as well be just another ending for others.

This 16th century drama in sexy film is filled with visual and verbal splendor.

WOW! This movie is a tad bit out there, but it is very good. I cried because towards the end it gets very emotional.