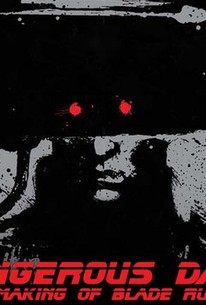 There are no critic reviews yet for Dangerous Days: Making Blade Runner. Keep checking Rotten Tomatoes for updates!

For years the only Behind the Scenes material promptly available on not just the making of Blade Runner but its troubled history came in the form of Paul M. Sammon's monstrously entertaining Film Noir: The Making of Blade Runner book. There had been little snippets or featurettes on TV, and certainly some behind the scenes material had been shot for the film, but none of it had really seen the light of day. That all changed when Charles de Lauzirika and his team put together one of the greatest home video releases ever: the Blade Runner 5 Disc Collection. Featuring all five cuts of the film (Workprint, Original Theatrical, International, Director's Cut and the newly-completed Final Cut), plus an amazing array of bonus material, this really was one of the holy grails of home video releases. Among it all was an amazing 3 1/2 hour documentary on the making of the film called Dangerous Days: Making Blade Runner. Fans of the film couldn't have been happier, and the documentary was a masterstroke. It equals the film in terms of entertainment value, and I get glued to the TV whenever I have it on. It's one of the best documentaries about a film I've ever seen and other than the Alien documentaries, Never Sleep Again: The Elm Street Legacy and the making of the original King Kong documentary, it's among the best ever made.

"This movie, to me, embodies the elegance, the power, and the uniqueness of a film experience." Dangerous Days is an exhaustive (almost 4 hours!) documentary about the making of Blade Runner. It's (obviously) mostly for hardcore fans, but it's quite a treat for those people who can't get enough information about that landmark sci-fi movie. Almost everything you could possibly want to know about the film, from its conception, to casting, art, filming, set design, and its release, is covered in detail. There are tons of candid interviews with the actors, writers, Ridley Scott, financiers production designers, and many other people who were involve with the creation of the movie, as well as reactions from other directors like Guillermo del Toro about their own personal thoughts on Blade Runner. Plus, we get an entertaining view of all the backstage drama (and there was quite a lot of it) that went on during the film's production. There is also a lot of unused scenes, behind-the-scenes set footage, and designs sprinkled liberally throughout, that (as far as I know) you can't see anywhere else. I actually learned a lot about the filmmaking process in general, from watching this. Despite the lengthy running time, I was interested the whole way through. This is a gold mine for people who love all things Blade Runner. I wish these kinds of thorough documentaries existed for more of my favorite movies.