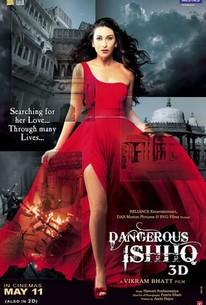 Rohan (Rajniesh Duggal), son of one of the nation's foremost business tycoons and supermodel Sanjana (Karisma Kapoor) have been one of the most popular couples in the social circuit. When Sanjana decides against flying to Paris at the last minute - for a lucrative modeling assignment, she does so, not just because she cannot bear to stay away from her boyfriend Rohan, but more importantly because her instincts push her against going. But what her instincts cannot do, is stop Rohan from getting kidnapped. The high profile kidnapping creates chaos in Sanjana's life. The kidnappers demand 50 crore rupees. The police however believe that even paying the ransom will not bring Rohan back. It is in this extreme trauma that Sanjana discovers something extraordinary. She sees visions of them together - sometime in the past - in different eras. She is confused initially but in her visions lay definitive clues that could lead her to save the love of her life. -- (C) Official Site

This is a terrible film, with not one redeeming factor.

The idea of the past's effect on the present is handled in such a direct "ah-ha!" manner - scars that unmask character identity, spells that span time - as to feel ham-fisted rather than mystical.

Ms. Kapoor and Mr. Duggall don't have much chemistry, and the film is too silly to have any emotional traction. In Hindi cinema, that's unforgivable.

It seems that the filmmakers gave up and rested on their meager laurels once arriving at the time-jumping reincarnation conceit.

What at first appears to be a conventional thriller about a woman's desperate efforts to rescue her kidnapped fiancé takes a mystical turn.

There are no featured audience reviews yet. Click the link below to see what others say about Dangerous Ishhq!