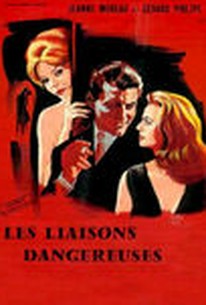 Pierre Ambroise Francois Choderlos de Laclos's 18th century novel Les Liaisons Dangereuses was filmed several times. In Roger Vadim's version, Jeanne Moreau coerces her husband Gerard Philippe into ruining the reputation of pious Annette Vadim (the director's wife at the time). Philippe spoils Moreau's nasty little plan by falling in love with his intended victim. While the novel merely humiliated Moreau's character for her misdeeds, Vadim comes up with a far more painful and permanent punishment. Since the release of the 1988 Dangerous Liaisons, Vadim's film has travelled under the title Dangerous Liaisons 1960 (even though it was technically completed in 1959, and released to the U.S. in 1961). ~ Hal Erickson, Rovi

Nicolas Vogel
as Court
View All

The trouble with Les Liaisons Dangereuses is that Roger Vadim is a banal director with a defective sense of style. And style is what was needed for this transliteration into modern terms of Laclos' eighteenth-century novel.

The soundtrack by Thelonious Monk is outstanding, worth listening to even if the film itself doesn't interest you.

Vadim broke filmic sexual taboos for his time which seem tame nowadays, and so this look at decadence may be nigh forgotten and yet it still holds power as an intelligent liberal couple sow seeds of discontent merely because they can ... to their consuming regret (it was still the 1950's!). Interesting especially as seduction is very important to coercion in Vadim's eyes, and how American jazz, supplied by no less than Thelonius Monk, is only a tool of that decadence ...