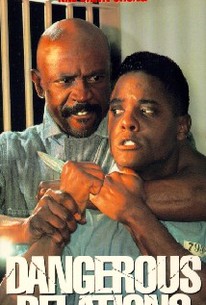 Originally made for television, this prison drama centers on a hard-core convict who for the past decade has been the king of the other prisoners. Just before he is to be paroled, a young inmate challenges him. This creates considerable tension until he learns that he and the youth are related by more than mere circumstance.

Luke Askew
as The Warden

John Del Regno
as The Bookmaker

Will Gill Jr.
as Bar Patron

Santos Morales
as Trustee
View All

There are no critic reviews yet for Dangerous Relations. Keep checking Rotten Tomatoes for updates!

There are no featured audience reviews yet. Click the link below to see what others say about Dangerous Relations!