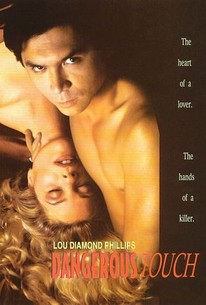 Radio sex therapist Kate Vernon could use a slice of her own advice in the R-rated Dangerous Touch. Against her better judgement, she falls hard for charismatic Lou Diamond Phillips. As the relationship intensifies (and we see plenty of that intensification), Phillips inveigles Vernon in a hellish world of crime, double-cross and death. Why is it that we would know enough not to get in so deep, but the characters on the screen don't seem to have any sort of built-in early warning system? Why? Because someone has to watch movies like Dangerous Touch, and yell such things as "Look Out!" "Don't Trust Him!" and "What the heck were you thinking of?" at the screen.

Tom Dugan
as Freddie
View All

There are no critic reviews yet for Dangerous Touch. Keep checking Rotten Tomatoes for updates!