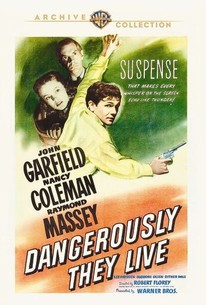 In this wartime drama, a doctor discovers that one of his patients isn't as crazy as he thought, with dangerous consequences for the whole world. Dr. Michael Lewis (John Garfield) is an intern at a hospital where a woman named Jane (Nancy Coleman) is admitted. Jane was injured in a car wreck, and she tells Michael a remarkable story. She claims that she is actually an espionage agent with top-secret information that could help the Allied war effort; the accident occurred while she was trying to escape from Axis spies who will do anything to get her documents. Michael, who is supposed to keep an eye on Jane, thinks she must be delusional, and when psychiatrist Dr. Ingersol (Raymond Massey) arrives with Jane's father, Mr. Goodwin (Moroni Olsen), he signs Jane out in their custody. However, Michael soon discovers that Mr. Goodwin isn't Jane's father at all; he and Ingersol are actually the Nazi spies Jane was fleeing in the accident, and someone must rescue her before it's too late, both for Jane and the Allied war effort. Dangerously They Live was scripted by Marion Parsonnet from her novel, Remember Tomorrow.

Sven Hugo Borg
as Under Officer

Lon McCallister
as Newsboy
View All

Critic Reviews for Dangerously They Live

The movie is fast-paced and the performances are excellent. [Full Review in Spanish]

An entertaining propaganda piece that is fitting for the wartime.

Audience Reviews for Dangerously They Live

Competent programmer beneath the talents of Garfield and Massey.