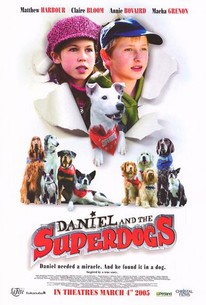 Daniel and the Superdogs Photos

A young boy still recovering from his mother's recent death teams with his two best friends to turn a regular pooch into a stunt-performing super-dog in this affectionate comedy for the whole family. Losing a parent is never easy, but for 11 year old Daniel it's been especially hard; when his father dives into work in an attempt to keep his grief at bay, Daniel starts causing mischief around the neighborhood with his best friends William and Colin. When the kids catch wind of a canine competition that's coming to town, they focus on training lovable canine named Gypsy into a true contender. Trouble is, Daniel's father has forbidden him from hanging out with William and Colin after the trio destroyed a neighbor's barn. But good friends are just what Daniel needs most right now, and by secretly teaming with his pals to teach Gypsy some outrageous new tricks, the troubled young boy develops the courage to overcome any problem that life throws his way. ~ Jason Buchanan, Rovi

Critic Reviews for Daniel and the Superdogs

Audience Reviews for Daniel and the Superdogs

There are no featured audience reviews yet. Click the link below to see what others say about Daniel and the Superdogs!

Daniel and the Superdogs Quotes