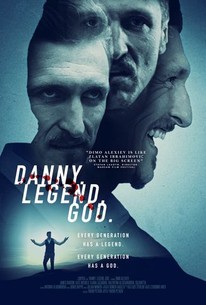 DANNY is an influential city councilor and businessman in an unnamed Eastern European town. He is young and charismatic and some of the things he says are funny in the extreme. Danny has agreed to be the subject of a documentary on money laundering. But as soon as they arrive, Danny tells the film crew to forget about their script and just follow him and film everything. The documentary is now a feature called "DANNY. LEGEND. GOD."

The satire transforms into something more hard-faced: a hit job on corruption, and the cult of the neo-capitalist hardman in the former eastern bloc.

Perhaps what makes Danny. Legend. God so blackly amusing (and unnerving) is that its amoral title character doesn't exist too far outside the realm of believability.

Offbeat in approach and satisfying in consummation, this is a recommendation for anyone who's ever pondered how the crass and incapable can rise to heights grossly underserved.

If you are a fan of gonzo-inspired filmmaking or satirizing the superfluity of mob life, Danny Legend God will deliver all of the above.

...something of a treat for those who want their films tough, edgy and reflective of the dark and dangerous now...

Once the crew begins to say out loud that they're 'accomplices now', the films slips further into a kind of eerie familiarity. Where have I heard that before?

A well-executed debut with an amazing performance from leading man [Dimo] Alexiev.

The indie film connects mostly because Alexiev plays his annoying Danny character as Borat as he could.

This film will certainly please the fans of Mockumentary but will surely have difficulty convincing the rest of the spectators, because of its slowness, and its lack of subtlety.

There are no featured reviews for Danny. Legend. God. at this time.