Darby O'Gill and the Little People1959 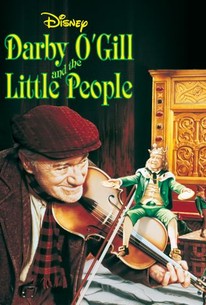 Darby O'Gill (Albert Sharpe ) is a fiddle playing caretaker of an Irish governor's estate. Nearing retirement, Michael McBride (Sean Connery) arrives as Darby's replacement. That night, Darby chases a runaway horse to a haunted hilltop and falls down a well. He ends up in the land of the leprechauns, where the diminutive King Brian orders him to play his fiddle. The leprechauns proceed to dance a wild jig before they leave their home and invade the nearby town for a night of revelry. Darby escapes, and King Brian follows him home, where the two engage in an all night drinking binge. In the morning the King is rendered powerless and Darby won't let the King leave until he is granted three wishes. The King tricks Darby into using up two of the wishes, but the third wish is used for uniting the new caretaker and Darby's beautiful daughter in marriage. When his daughter hits her head on a rock and nears death, Darby offers to take her place. He is saved from boarding a terrifying death coach by a grateful King Brian's magic powers. Walt Disney personally toured Ireland and researched the legends, people and customs of the Emerald Isle years before the film was made. The special effects are excellent, and the viewer has no trouble believing the dancing leprechauns are less than two feet tall in this delightful fantasy.

Critic Reviews for Darby O'Gill and the Little People

For those of a sentimental turn, there is the delight of watching young Connery romancing the ineffably wholesome Janet Munro, a couple of years before things turned nasty for Commander Bond at Crab Key with the somewhat more knowing Ursula Andress.

No one believes a man known for spinning tales full of blarney when he indeed befriends the king of the leprechauns.

I was 6 when I saw this Walt Disney fantasy at my local theater, and when the cheesy but ghostly Coach of Death descends from the sky, I might have considered wearing diapers even then.

It's not quite as well-known as it should be but it's really delightful.

The film presents a series of utterly charming moments, some magical and some down-to-earth but, considering the setting, equally utopian.

...ultimately an entertaining (if all-too-slight) piece of work.

One of the rare few family movies that should enchant both children and grown-ups.

I have to admit that by the second or third time I saw leprechauns depicted as magical by speeding up the film, I was hoping for someone to show up with a gun.

This excellent fantasy romps through the folklore world of Ireland.

Audience Reviews for Darby O'Gill and the Little People

Inconsequential Disney. Darby O'Gill doesn't come up in any list of Disney classics or fondly remembered films from the studio. Why? It's a little fantasy designed to cash in on a culture instead of telling a quality story. The biggest hurdle for the family audience is the thick accents of the main cast, while the somewhat plodding story tends to be an issue as well. It's not a badly made movie; it's just "meh." The forced perspective shots of the leprechauns, though, is a treat.

I liked it when I was a kid. Seeing Connery so young is a little strange. The banshee in the movie was pretty scary when I was a kid and I think it still gives me a chill just thinking about it.