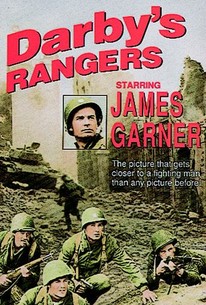 James Garner stars as WWII hero Major William Darby in this characteristically gusty William Wellman combat film. Darby organizes a highly-trained group of rangers, to be deployed in behind-the-lines activities in Italy and Northern Africa. The first portion of the film details the training, with time out for a few comic and romantic interludes; the second part shows Darby's Rangers in full, ferocious action. In addition to Garner, Warner Bros. used Darby's Rangers to spotlight another of its TV stars, Edd "Kookie" Byrnes; Bill Wellman Jr. also shows up in the supporting role of Eli Clatworthy. The film was adapted from the book by Major James Altieri. ~ Hal Erickson, Rovi

Never have I seen a military drama so done in by sex. It's not enough to say that romance is a recurring distraction in this film; it would be more accurate to describe the battle scenes as interrupting all the mush.

There are no featured audience reviews yet. Click the link below to see what others say about Darby's Rangers!