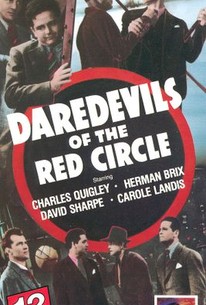 The inauguration of a stage line created the excitement of this fine 12 chapter Western serial directed for Republic Pictures by the talented John English, for once sans his partner William Witney. Duke Cameron Allan Lane and June FosterKay Aldridge battle both Indians and a greedy villain in order to complete a stage line road through the Comanche Strip. A handsome second lead, Lane later added "Rocky" to his name and became a fixture in B-Westerns. Later still, he provided the voice for television's Mr. Ed. Not one of Hollywood's more adventurous stars, Lane had Tom Steele double for him even in quite benign fight sequences. The brunette Miss Aldridge is perhaps best remembered for playing the title role in the jungle serial Perils of Nyoka (1942).

Critic Reviews for Daredevils of the Red Circle

From start to finish, the chapters roll by offering fans of the genre chases, explosions, gun battles, fistfights and well-done cliffhangers.

There are no featured reviews for Daredevils of the Red Circle at this time.

Daredevils of the Red Circle Quotes