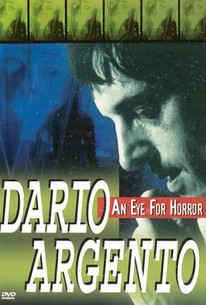 Italian filmmaker Dario Argento has gained a well-deserved reputation among horror film buffs as one of the most distinctive and original directors working in the genre, creating visually stylized and emotionally complex nightmares filled with blood and menace. Dario Argento: An Eye for Horror is a documentary on the filmmaker's career that looks at his work of the past (and his relationship with former girlfriend Daria Nicolodi and daughter Asia Argento, both of whom are actresses who have appeared in several of his films) as well as his future as he works on his 2001 release Non Ho Sonno.

Critic Reviews for Dario Argento: An Eye For Horror

There are no critic reviews yet for Dario Argento: An Eye For Horror. Keep checking Rotten Tomatoes for updates!

Audience Reviews for Dario Argento: An Eye For Horror

Damnit, why can't I have a top producer as a parent? Was intending to use this as a guide to his filmography so I could decide which to view next. Didn't work out for that purpose, but gave me a very nice profile of how this master works. Good for film students and horror fans. Highlights: Romero talks the making of "Dawn of the Dead" and also describes Argento as a "impressionist" film-maker. Savini talks about his work with Argento. Asia Argento discusses (or refuses to discuss) the perplexing psychological implications of her father having filmed many scenes across his filmography in which characters played by his wife and daughters are subjected to the horrors of murder and rape.

Nothing too insightful here. But it is an enjoyable little peek into the mind of one of my favorite directors. Worth seeing if you are a fan of his work.

A documentary about Dario Argento - not as well done as "Dario Argento's World of Horror", but more current.