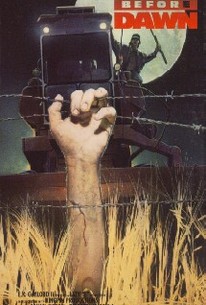 The good people of Milo, Kansas (pop. 1,972) combine forces to battle against the evil agribusiness Farmco that conspires to drive up the price of bread to six dollars a loaf. Farmer Jeff Parker (Sonny Gibson) and the crusading journalist Charlie Stevens (Buck Henry) recruit former Farmco executive James Kirkland (Doug McClure) who resigns when his conscience bothers him too much. Reporter Roger Crandall (Paul Newson) uncovers the plot to inflate the price of grain and sends it to colleague Jessica Stanton (Reparata Mazzola) before he is killed. Jessica investigates Roger's "accidental" death and the shooting of a federal grain inspector. Jeff saves Jessica after she is kidnapped and drugged with ether. Ben Johnson plays the local sheriff in this message drama.

Woody Watson
as Luther
View All

Critic Reviews for Dark Before Dawn

There are no critic reviews yet for Dark Before Dawn. Keep checking Rotten Tomatoes for updates!

There are no featured reviews for Dark Before Dawn at this time.