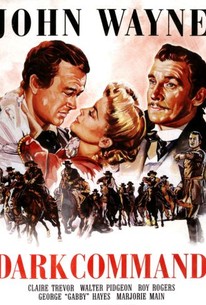 Set in the years leading up to the Civil War and its outbreak, Dark Command tells a fictionalized version of the story of William Clarke Quantrill, the schoolteacher-turned-renegade, whose raids -- ostensibly on behalf of the Confederacy -- turned Kansas into a charnel house. John Wayne plays Bob Setton, a young Texan who arrives in Lawrence, KS, in 1859 on his way west, partnered with George "Gabby" Hayes. He meets Marie McCloud (Claire Trevor) and her younger brother, Fletch (Roy Rogers), and takes a liking to them, especially Marie. His only competition for her is William Cantrell (Walter Pidgeon), the local schoolteacher, who has big ambitions in life. He is nominated for town marshal and seems a shoo-in, especially as his only rival is Bob Setton, who admits he knows nothing about the law and can't even read, but Setton wins with his honest, unpretentious speech. At the time, Kansas is riven by strife, as settlers from the North opposed to slavery and those from the South supporting it pour into the territory, and Setton has his hands full. His most difficult personal moment comes when he must arrest Fletch for shooting an anti-slavery farmer (Trevor Bardette) to death. Cantrell leads a campaign of terror against the jury, however, which finds the young man not guilty just as the Civil War breaks out. In the months that follow, Setton and his posse go after the raiders who are stealing and destroying huge amounts of property in Kansas on behalf of the Confederacy. He suspects Cantrell is their leader, but can't prove it, and has to tread carefully. As the raids worsen, and the war drags on -- even Marie's pro-Confederacy banker father is murdered during a run on his bank -- their conflict comes to a violent end as Cantrell launches an attack on Lawrence, vowing to destroy the town, with only Bob Setton and Cantrell's own mother (Marjorie Main) standing in his way. ~ Bruce Eder, Rovi

Walter Pidgeon
as William 'Will' Cantrell

Harry Strang
as Man at Bank

Hal Taliaferro
as Vigilante
View All

Critic Reviews for The Dark Command

The action develops, thanks to Raoul Walsh's capable direction, without interruption, intensely absorbing the viewer's attention. [Full review in Spanish]

Above average western covering the Quantrill territory, full of fiction over fact, and starring John Wayne and Roy Rogers.

Nominated for the Interior Decoration and Score Oscars, this John Wayne pre-Civil War adventure is better than the norm due to Raoul Walsh's direction and good cast.

Audience Reviews for The Dark Command

While this is a John Wayne Western, and the big goof is indeed here and doing the typical John Wayne thing (with nearly every line peppered w/a reference to how great Texas is, statewise), but this is not really his show. In point of fact his is the most cliche and flat of every role in this. Everyone else is having a time spreading their wings and breaking their usual movieland duties. Walter Pidgeon plays the bad guy (because his 'good guy' is so very in-your-face underappreciated), Roy Rodgers is a murderer, and Marjorie Main very nearly embodies the figure of Death itself. I blame the director, Raoul Walsh, who makes this a cowboy feature where the horses don't walk away (trot?) with the whole dang shebang. A better-than-most Western and well worth your time.

Not bad revisionist take on Quantrill's Raiders repurposed into a John Wayne vehicle. The film, the followup to Stagecoach, was the picture that actually confirmed the Duke's marketability since it ended up being a huge hit. Roy Rogers, free of Trigger for a change, does a good job as Claire's brother.