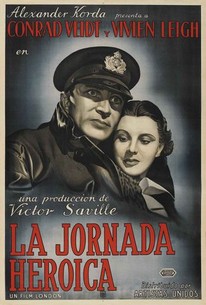 The unorthodox teaming of Vivien Leigh and Conrad Veidt is but one of the many pleasures of the 1937 spy yarn Dark Journey. Leigh plays a Stockholm dress-shop owner during World War I, who, being a neutral, is permitted to travel unmolested to and from France. Veidt plays a supposedly disgraced German officer who is actually head of his country's secret service. The two fall in love, despite the fact that Leigh has a secret as well: she is a double agent, sympathetic towards the Allied cause. During one of Leigh's voyages to France, her ship is captured by a German U-boat. Veidt swaggers on board, threatening to sink the ship if Leigh is not turned over to him. But the circumstances reverse themselves, and Veidt finds himself Leigh's prisoner--a circumstance that is not altogether unpleasant for him. When originally released in England, Dark Journey bore the title The Anxious Years.

Robert Newton
as Officer of U-Boat

Percy Walsh
as Captain of the Swedish Packet

The plot is ingenious, but unfortunately so complicated that for a good deal of the time the audience is almost as baffled as the governments involved.

Relationships as the continuous encoding and decoding of objects and gestures

Rescued from the doldrums by the polished performances of Vivien Leigh and Conrad Veidt.

There are no featured audience reviews yet. Click the link below to see what others say about Dark Journey!