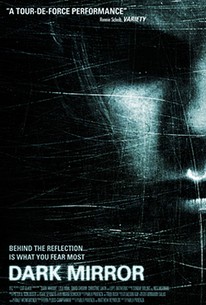 Bizarre occurrences plague a home, but it remains unclear if they signal a manifestation of evil or the illusory products of a woman's mental breakdown in Dark Mirror, director and co-screenwriter Pablo Proenza's tense supernatural thriller. The tale begins when a family of three -- photographer-cum-mother Deborah (Lisa Vidal), her husband, Jim (David Chisum), and their son, Ian (Joshua Pelegrin) -- move into a house with a number of oddities attached, including not only a shady history, but creepy aesthetic touches such as mirrors that reflect to infinity and panels made of beveled glass. Deborah begins to work toward rebuilding her career behind the camera, but everyone who appears in her photographs suddenly and inexplicably dies. On an even more unsettling note, Deborah begins to suspect that the two women closest to her -- her best friend and her mother -- are in fact the walking dead, or zombies. The occurrences in the house seem to manifest themselves as omens, beckoning Deborah to interpret everything, but the signs conflict -- and threaten to drive Deborah beyond the point of comprehension when she discovers an odd book left behind by the prior owners, and filled with strange, cryptic diagrams and notations. ~ Nathan Southern, Rovi

Vidal sells the story of a woman who may just be going insane. She's very, very good, elevating what Proenza misses.

Hollow, dull and too obviously inspired by Asian ghost stories.

Much better than I expected. A very errie, frightneing ghost story with plenty of blood and scares. Loved the twist ending as well. An interesting flick.