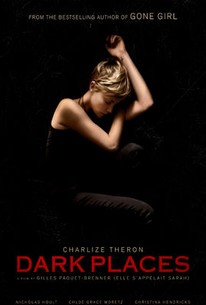 Critics Consensus: Dark Places has a strong cast and bestselling source material, but none of it adds up to more than a mediocre thriller that gets tripped up on its own twists.

Critics Consensus: Dark Places has a strong cast and bestselling source material, but none of it adds up to more than a mediocre thriller that gets tripped up on its own twists.

Critic Consensus: Dark Places has a strong cast and bestselling source material, but none of it adds up to more than a mediocre thriller that gets tripped up on its own twists.

25 years after testifying against her brother as the person responsible for massacring her entire family, a haunted woman (Charlize Theron) is approached by a secret society that specializes in complex, unsolved cases. Nicholas Hoult, Corey Stoll, and Chloe Moretz co-star in this Mandalay Pictures thriller directed by Gilles Paquet-Brenner, and based on the novel by Gillian Flynn. ~ Jason Buchanan, Rovi

Paquet-Brenner invests the split-time action with some brooding menace and the cinematographer, Barry Ackroyd, does his best to lend some urgency, even as things spiral from suspense into outright silliness.

The film, overall, is fatally uncertain of its identity - never quite certain whether it's a gruesome murder-mystery out to shock us or a heavy, character-based drama about a family torn apart.

All in all, its contrivances might have been indulged more satisfyingly in a TV miniseries.

That unnerving way Flynn has of taking us to dark, deliciously twisted places has been utterly massacred.

The third offering from Flynn Dark Places does its best to stir a multitude of emotions within us, but in doing so, the film feels contrived and hurried.

The surface level generic pleasures of Dark Places and the stellar cast are entertaining enough, even if it doesn't quite stick the landing.

There is quite a bit to Dark Places that appears very marketable, at least on the surface.

'Dark Places' is a complete waste of time that wastes Theron, Moretz and the rest of the cast to give us a lazy thriller. [Full Review in Spanish]

Dark Places rarely rises above the level of tepid episode of "Cold Case."

The possibility of fast-tracking another of Gillian Flynn's intricately plotted thrillers from page to screen must have seemed like a fantastic idea... To call the final product a botch job would be a considerable kindness; it's just plain awful.

[An] apathetic film with no fire in its belly.

All this leaves us with Charlize Theron, an unquestionably talented actress who has somehow failed to find her rightful place.

Coming off the success of 'Gone Girl', Dark Places is the adaptation of Gillian Flynn's 2009 novel of the same name and it's all about re-visiting an old case (25 years old) who some say is still unsolved, and so begins the movie. The story was adequate, I was kept intrigued throughout even if the film did drag in some places. The switching between past and present was needed in order to maintain the suspense and fill in details about the plot, so that was good choice. The film was well shot and well directed. Theron and Hoult were excellent, in fact the whole cast was good, especially Sheridan. So why did i not overly enjoy it? Firstly the major twist of the film is way too predictable, too many characters and not enough screen time to actually establish their purpose to the story and finally the characters themselves just aren't likeable. We're supposed to relate to Theron's character and sympathise with her, but she just isn't likeable and thus ultimately did not care for the outcome. If you have low expectations, you may enjoy this film for what it is, and that's a slow dark mystery film...just don't expect to be wowed by it.

Go in with lowered expectations, and you might end up doing alright out of Dark Places. If nothing else, you've got to at the very least admire that cast.

So disappointed. I loved the book, but this felt blah to me. Dark and dull to look at, even the cast looked unattractive, and that's quite an achievement. I was bored and I knew what to expect. Admittedly this is because I read the book, but I can't imagine being overly enthralled even if I hadn't. A lot of bits and characters were left out and some of the cast also didn't look right. It felt like a TV movie to me.

The movie was fairly engaging. The ending wasn't satisfactory, but I saw it coming and was prepared enough to not be disappointed by it. There aren't many movies these days around that meet my expectations, and I wasn't expecting much from this either. Thankfully, the low expectations worked in its favor and spared me from the anticipated spell of boredom!