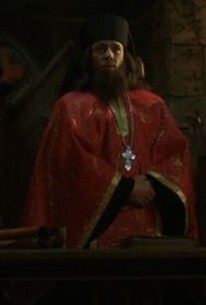 Parting company with the traditional filmic representations of vampire supreme Count Dracula, this made-for-cable film harks back to the known facts concerning Dracula's real-life "role model," 15th century Transylvanian patriot Vlad Drakul (translation: "Knight of the Dragon"). Hoping to avenge the death of his monarch father, and to free his kingdom from Turkish rule, Vlad (Rudolf Martin) raises an army and stages a revolution, cutting a bloody swath throughout the land. Though a basically sympathetic character at the beginning of his mission, Vlad becomes progressively more murderous and sadistic as the war rages on; he is particularly fond of impaling his victims and hanging their writhing bodies on walls and trees, hence his nickname "Vlad the Impaler." In so doing, he runs afoul of the Orthodox Church, which begins spreading rumors that Vlad is not only a sadistic killer, but also a genuine blood-sucking vampire. All of this hardly matters to Vlad who, in addition to rescuing his people from Turkish oppression, is also bent on settling a score with his treacherous brother Radu (Michael Sutton), who has gone over to the enemy. Filmed on location in Romania under the title Passions of Dracula: A True Story, Dark Prince: The True Story of Dracula made its American TV bow over the USA Network on October 31, 2000.

Rudolph Martin
as Vlad Drakul, AKA Vlad the Impaler

Critic Reviews for Dark Prince: The True Story of Dracula

It plays hell with the facts and reduces its potentially gripping subject to cheesy soap operatic melodrama. How can hats being nailed to Turkish emissaries' heads be dull?

Unlike the multitudes of generic rip offs that come out annually, this low-key effort finally puts a new spin on an old myth.

Well-intentioned but goofy take on the old bloodsucker legend.

If you're looking for more of that Buffy experience, you've come to the wrong place.

Audience Reviews for Dark Prince: The True Story of Dracula

This had its moments, but overall, felt too tv-ish.

I thought this was a vampire film, nevertheless I watched the whole thing. I thought it was pretty good for what it was a historical / horror film.

This movie could have been SO much better than it was. The story of Dracula the merciless prince was a good one, but they tried to murk it up with half-hearted supernatural bunk. It wasn't very well cast either. Disappointing.