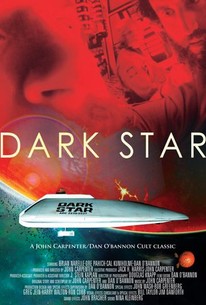 Critics Consensus: A loopy 2001 satire, Dark Star may not be the most consistent sci-fi comedy, but its portrayal of human eccentricity is a welcome addition to the genre.

Critics Consensus: A loopy 2001 satire, Dark Star may not be the most consistent sci-fi comedy, but its portrayal of human eccentricity is a welcome addition to the genre.

Critic Consensus: A loopy 2001 satire, Dark Star may not be the most consistent sci-fi comedy, but its portrayal of human eccentricity is a welcome addition to the genre.

John Carpenter directed this wigged-out spoof of 2001: A Space Odyssey. The film originally began as a 45-minute U.S.C. student film project by Carpenter and Dan O'Bannon that was eventually expanded into a feature length production. The sstory takes place on the deep-space cruiser Dark Star, where a crew of laid-back astronauts are assigned the task of blowing up planets with unsuitable life forms in order to make the universe safe for the human race. The leader is Commander Powell (Joe Sanders), who is cryogenically frozen after being killed in a freak accident. Next in line is Doolittle (Brian Narelle) who tries to keep the rest of the crew in check. However, there is a lot of down time between planetary explosions and the tediousness is starting to get to everyone. However, after a series of accidents, a smart bomb --i.e. a bomb that can talk and think on its own-- does not detach itself from the ship as planned and will explode within 24 minutes unless it can be cajoled into disarming itself.

By introducing human eccentricities into the cold structure of SF, Carpenter creates a vision of the technological future that is both disillusioned and oddly affirmative in its insistence on the unscientific survival of emotional frailty.

The dim comedy consists of sophomoric notations and mistimed one-liners.

Isn't nearly as funny as it once was...but it nonetheless has its amusing moments.

There are some funny routines here, though Mr. Carpenter doesn't seem to have cared much about integrating or sustaining them.

...a must-watch for anyone who dug Star Wars, Alien, Halloween or The Thing...

If it weren't for the extremely primitive special effects and set designs (though decent considering the budget), the picture might have succeeded as outright horror.

All good fun, without much substance or lasting power.

... a grungy, darkly humorous declaration that, in the end, boredom and human slovenliness trumps technology and high ideals.

It wouldn't be a cult classic if everybody liked it, now would it?

I suppose it would have been entertaining for its time (despite Star Wars) and I did find it a slow but thoughtful and interesting piece. I can see the similarities between this and 2001 which is not a bad thing. It was well thought out and had some great comedy moments (intended or not). A good watch but not something you could view again and again.

Carpenter's first movie is a dud! It's supposed to be a spoof of 2001, but it's even more boring, as the jokes are obvious and unfunny. I hated this movie, and I've been trying to sell my copy ever since!