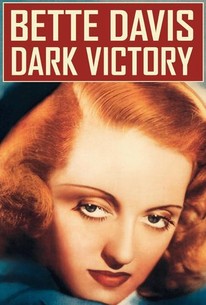 Critics Consensus: Bette Davis does it her way with a tour de force performance in Dark Victory, a moving melodrama that snatches triumph from the jaws of mortality.

Critics Consensus: Bette Davis does it her way with a tour de force performance in Dark Victory, a moving melodrama that snatches triumph from the jaws of mortality.

Critic Consensus: Bette Davis does it her way with a tour de force performance in Dark Victory, a moving melodrama that snatches triumph from the jaws of mortality.

Bette Davis earned an Oscar nomination for her role in this classic four-hanky tearjerker. Judith Traherne (Bette Davis) is a very wealthy Long Island heiress whose life is a constant whirl of cocktails, parties, and wild living. Despite her hedonistic lifestyle, Judith derives little pleasure from life except for her horses, cared for by stable master Michael O'Leary (Humphrey Bogart). When Judith begins suffering from headaches and dizzy spells, Dr. Frederick Steele (George Brent) gives her the bad news: she has a brain tumor that could threaten her life if not treated immediately. Judith consents to surgery, and Frederick informs her that the operation was a success. A grateful Judith quickly falls in love with Frederick, and they plan to marry. However, the tumor returns, and when Judith discovers that she has only a few months to live, she calls off the wedding, convinced that Frederick is marrying her only as an act of pity for a dying woman. A major success and perennial favorite, Dark Victory was later remade as Stolen Hours with Susan Hayward and as a TV movie starring Elizabeth Montgomery.

Rosella Towne
as Girl in Box

Will Morgan
as Doctor

Judith frequently grasps onto objects, her clothes or a chair... Davis has so much energy and life force flowing through her that she has to direct it somewhere.

Bette Davis loses her sight, and we gain a classic.

Guilty pleasure: One of Warner's best acted melodramas and Bette Davis's all-time favorite, in which she lives hard but dies in dignity as an heiress gone blind. Also Davis revenge as Tallulah Bankhead failed to bring the role to life in the 1934 play.

Even by the standards of a typical Bette Davis melodrama Dark Victory is an embarrassment of riches.

The themes tend to be more powerful than the individual events, as tinier episodes populate a tale in need of more significant happenings.

One of the finest weepies ever made by Hollywood. Davis is nothing short of magnificent.

Naught but a torrid melodrama, but oh! what a humdinger of a melodrama it is! It's films like this that give trash a good name.

A classic women's pic that strings together a collection of syrupy clichés that can make a real man double up in pain.

It's horribly dated, playing today like some weird, contrived burlesque of common sense.

A woman discovers that she has a brain tumor and falls in love with her doctor. When viewed vis a vis Ikiru, Akira Kurosawa's brilliant film, Dark Victory has a lot to learn. The film posits that a patient's knowledge of his/her condition is detrimental, but Kurosawa is wiser, and the ruminations on mortality and life's usefulness are more poignant and inspiring. Though its embrasure of love, marriage, and romance feel petty against its betters, Dark Victory is a good film in and of itself, propelled by a great Bette Davis performance and George Brent's soulful gazes. Davis is delightful, and the film is saccharine in all the right places. Overall, you should watch this if you can't get a hold of Ikiru.

This is a good movie, with good actors, and a good story. It's a dramatic and exciting thriller. I saw it a while ago, but I remember it was good.

"I think I'll have a large order of PROGNOSIS NEGATIVE." Bette Davis has a brain tumor and about 10 months to live. A classic that's replete with melodrama and old fashioned sentimentality.

Judith Traherne (Bette Davis) is rich and young, but also has been having dizzy/ fainting spells. She is all but dragged to the local brain surgeon, Dr. Frederick "the Animal" Steele (Brent) who tells her he needs to pop her melon open for a look-see. He goes in there, takes care of what he can (it's all very vague), but the results are pretty bad, in fact, it's "prognosis: negative". Judy only has months to live, so the doctor conspires with her friend/ personal assistant (Fitzgerald) to keep it from her, and let her live her life as always, without imminent death looming over her head. If you think this all sounds like an excellent musical comedy, while I'd agree with you, you'd best think again. Dark Victory is played pretty straight, and while there is some unintentional humor (Humphrey Bogart as an irish horse trainer replete with bad, phony accent?), it's not exploited to the point of being thoroughly enjoyable. I'm also convinced that Ronald Reagan was the David Arquette of his day, in that he's quite convincing at playing the 'dumb' guy, to the point where you're not so sure he's acting. Reagan was really... wow. And that guy got to be our president??? Dr. Emmett Brown's incredulity at Marty McFly's flippant remark that "Reagan is president in the future" seems completely warranted and even logical to me now, as I'm sure I'd react the same way if some kid from the future came back to tell me about President Arquette. Also, I realize that back in the 30s, smoking was seen as a health exercise, much in the way we treat juicing machines today, but watching the doctor smoke while talking to the patient who's lying in bed and smoking, it's a little too much. If you were to edit out the smoking scenes from this movie, it would be about 30 seconds long. Anyway, at the end of the movie, she dies, but you already knew that. What's amazing to me is, the doctor marrys her, drags her off to Vermont of all places, and then holes up in his laboratory to do unrelated research. He's so engrossed in his work, he even gets annoyed when she dares bring him his lunch. Gee, what a way to spend your last remaining days on earth, as a subservient wife to an asshole doctor in the middle of nowhere Vermont.