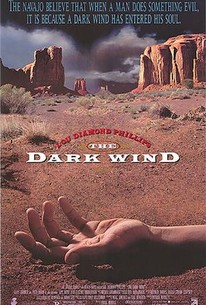 Noted documentary filmmaker Errol Morris made his dramatic feature debut with this story about murder and other dirty dealings on an American Indian reservation. Recent college graduate Jim Chee (Lou Diamond Phillips) has just taken a job with the Navajo Reservation Police in Arizona, where he helps keep the peace with his superior Joe Leaphorn (Fred Ward) on land earmarked for joint use by Navajo and Hopi tribes. Cowboy Dashee (Gary Farmer), a sheriff from the Hopi law enforcement group, discovers a decaying and unidentified body in the desert, an event he thinks may be linked to a recent robbery at the reservation's trading post. The shop's Hopi manager, Jake West (John Karlen), is convinced that Joe Musket, a Navajo drug dealer and ne'er-do-well, is responsible, and as Chee and Leaphorn investigate the murder, the robbery, and a mysterious plane crash, they find themselves drawn into a web of corruption, prejudice, and deceit. Dark Wind was based on a novel by noted crime author Tony Hillerman.

Faye B. Tso
as Fannie

Critic Reviews for The Dark Wind

This is the first thriller I have seen in a long time which makes it without a single sex scene.

Audience Reviews for The Dark Wind

Navajo policeman Jim Chee solves a mystery on Indian land in Arizona. It is a fairly standard "New kid on the block figures out who the bad guys are with Indian overtones" type of movie.