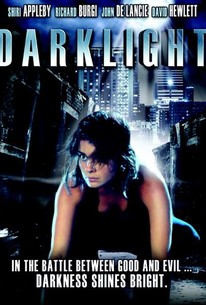 Filmed in Bulgaria, this made-for-cable thriller draws upon both Greek and Herbraic legend for its inspiration. Shiri Appleby stars as Liz Parker, a normal 24-year-old woman living a normal existence. At least, that's the case until Liz is informed that she is actually the immortal demoness Lilith, who in Biblical times had been the first wife of Adam and thus the evil doppelganger of Eve! Having cut a murderous swath through the world for centuries, Lilith had disappeared from view when she was hypnotized into believing she was an orphaned mortal--and thus "Liz Parker" was born. Now, a secret society called Faith is determined to bring Lilith back to life and to rechannel her evil powers for the forces of Good. It is up to Faith's chief agent William Shaw to keep Liz/Lilith on the path of righteousness, a task made doubly difficult by the fact that Lilith had killed Shaw's son years earlier. Naturally, there are those in the world who hope to benefit from the activities of the "bad" Lilith, and there's also a certain demon who must be destroyed in order to save mankind. Evidently intended as the pilot for a weekly series, DarkLight first aired September 18, 2004 on the Sci-Fi Channel.

Should only be watched if you're a hardcore fan of star Appleby.

I don't think I can put how awful this film is into actual words that, when put together, form a coherent and thoughtful review. Can you actually believe that this was intended to be a pilot movie? Like they were actually wanted to get this shit-show picked up as a series. I can't honestly wrap my head around that. Maybe the people involved in the making of this film, from cast and crew, had pretty much given up all hope. This film was aired of the then Sci-Fi Channel (now SyFy) about a week before the revived and revamped Battlestar Galactica series started airing. Can you imagine if this had been picked up as a series while BSG was on the air? I think Sci-Fi would've cancelled the series out of pure embarrassment for having such a wonderful television show as the revival BSG even in the same stratosphere as this. The idea isn't a bad one in the conventional sense. Like Lilith, in Jewish myth, being the first wife of Adam, you know, of Adam and Eve fame, but she was cast out as she refused to be seen as lesser to Adam. Lilith, angered by this, then became a beast, demon, whatever you wanna call it, that wanted revenge on those who wronged her. whether it be god or whatever. Pretty cool idea, right? No snarky comments from me, it's a legitimately cool idea. There's this group called the Faith that has been at battle with Lilith throughout the years, centuries even, trying to keep her in control and to keep her from killing others. Again, so far so good. Lilith, after a fight with Shaw, has her memory removed and she then joins the Faith in order to help against this evil scientist, a legit evil scientist, who uses samples of Lilith's DNA in order to become in mortal, then turns into a demon that can transmit a plague that would, eventually, destroy the world. So far so good. I mean we're getting a little goofy and convoluted here with Lilith losing her memory and being placed into a foster home by the same people created to destroy her. Not to mention the evil scientist. But there's still a decent idea to work with here. You'd hope that the film could somehow do something even remotely interesting with this. Well, sadly, you would be wrong. This film is just dreadful. The film is obviously a TV movie, but it just looks so fucking terrible. It's like a direct-to-video film that died on the rental circuit and is aired on your local channel on a Saturday at 2 in the morning because it's the only programming they have. The special effects, even for a 2004 TV film look atrocious. Jurassic Park, a film that came out a full decade earlier, 1993 to be exact, looks better than this. Granted, Jurassic Park had a considerably bigger budget, whereas this film probably got a pittance of that, adjusted for inflation as well, but it's still something that's worth pointing out. The script is even worse, like just has no idea what it's doing and what themes it wants to throw out there. Let's not even talk about the awful dialogue. 'Hey, ugly' is actually used as a legit one-liner. Seriously, it's like a 12-year-old wrote this. It's an incredibly poorly structured and put together film. No idea if the acting is less awful than the writing or if the writing is so bad that it makes solid actors, in theory, look even worse. The less said about the acting, the better. There's literally nothing about this movie that I can say I liked. I mean I liked the fact that I recognize John de Lancie, who played Jane's dad in Breaking Bad. I think de Lancie's character could've been a compelling one with a better writing staff. As it stands, he's just pretty much a villain for no real reason. Just cause I guess. I'm not gonna lower my standards because I knew that this was a TV movie, that's not how it should ever work. This is an awful movie, no matter how you slice it. It's not even entertainingly bad. Like there's the cliche 'giant explosion while I slowly walk away from it without flinching'. But I don't think this film even does it in an ironic fashion. It just seems like they thought that this was actually something cool for a character to do. Breaking Bad also did something similar to this with the really badass twins, you know the ones if you've watched the show, but, obviously, when they did it it was actually cool. This is an absolutely dreadful film. Just terrible stuff and no one should ever watch this, let's just let this fade away into the ether.