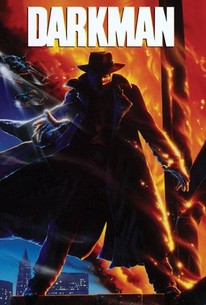 In this sci-fi crime melodrama, a scientist is busily doing research into using a computer to clone body parts when a corrupt developer orders his demise. Unfortunately, the developer's henchmen botch the job and leave the scientist horribly disfigured. Eager for vengeance, the scientist uses his invention to transform himself into a new crime fighter, Darkman.

Nicholas Worth
as Pauly

Phillip A. Gillis
as Priest

Frank Noon
as Side Show Barker

Philip A. Gillis
as Priest

Charles W. Young
as Dockworker with Bullet in Forehead

Cary Tyler
as Dockworker #6
View All

Darkman is funny, but it's no joke; it's the work of a man who underlines the conventions of adventure stories and horror because he enjoys them, and knows that even when rendered tongue-in-cheek, they're timeless.

Raimi isn't effective with his actors, and the dialogue lacks smart menace, but his canny visual sense carries many a scene.

Despite occasional silliness, Sam Raimi's Darkman has more wit, pathos and visual flamboyance than is usual in contemporary shockers.

Darkman sustains mild interest throughout, but it never takes off, partly because a real-estate scam, gangland shootouts, city corruption and a love story clutter up the sad story of Westlake's strange mutation.

The shadows grow longer, the edges wear sharper and the wounds run deeper than any superhero film at the time. It's a masterpiece of beauty, terror, heartbreak and excitement cobbled together through renegade means. Victor Frankenstein would approve.

One of Sam Raimi's best films...

Darkman still remains one of Sam Raimi's most ambitious projects to date and it's hard to do anything but admire the kind of lofty ambitions Raimi tosses at the screen with his self-created superhero crime thriller/dark comedy mash-up.

...comicbook slapstick and off-the-hook mania in a combination only previously seen in Evil Dead II.

Sam Raimi is behind this and you get just that, full-on-Raimi. Much of it will not make much sense, but who cares, cause the action is over-the-top in capital letters. Its a comic book movie, but one of the good ones. Look for the helicopter sequence, its a good 'un. Frances McDormand, what's she doing in here, but she does alright too.

This is probably one of the best comicbook characters that didn't actually start out as a comicbook character, he was in fact created by director Sam Raimi. Thinking about that its actually pretty impressive really, Raimi wanted to make a comicbook movie adaptation of one of the more well known existing characters but couldn't, so he just made up his own...kudos. What's even more impressive is the fact this character has gone on to become a popular cult comicbook franchise alongside Raimi's other famous creation Ash. The whole premise behind Darkman in my opinion is a humble beauty and the beast tale really. Obviously Liam Neeson's character gets horribly mutilated but what follows is very similar to that French fairytale. On the other hand you could also say the character is very similar to 'The Phantom of the Opera' both in plot terms and visualisation. I think its fairly easy to see how Darkman is visually similar to The Phantom with his face mask of bandages and black sweeping attire. His appearance also harks back to other classic dashing heroes of the 30's such as The Shadow and more so The Spirit in the 40's, the age old dark coloured fedora always looking the business. Yet another influence (in my opinion) for Darkman's look could be Universal's sci-fi horror icon The Invisible Man who literately wears the same outfit with bandages of course. The plot does kinda run along the same lines as 'Beauty and the Beast' or The Phantom. A disfigured man who hides in the shadows existing away from civilisation but watching them from a far at the same time. He has strong feelings for a woman whom he tries to protect and at the same time attempt to open up to her, but of course he cannot, he is conflicted inside over his hideous appearance. He is haunted by inner demons, how he is now treated and looked upon, and of course In this movie there is the added revenge and rage element against the mobsters that destroyed his life and face. Its the old winning formula of a hero (or anti-hero) who is scary for whatever reasons...but that fear draws you in, it intrigues you and makes you cheer for him. I remember when I first saw this movie back in my teen years I wrote it off as a blatant Batman-esque wannabe (foolishly). Back then I wasn't totally aware of Raimi's work and hadn't seen his Evil Dead movies so I thought the effects were crude and poorly done. Watching now, being wiser and more experienced with movies, its easy to spot those typical Raimi effects and sequences, his way of directing that had become his signature. Yes the effects are still crude looking (carnival mans obvious rubber fingers getting twisted by Westlake), much of the movie showcases really bad bluescreen and some of the movie just looks cheap, but it all has that glorious Raimi style that peaked with 'Army of Darkness'. The most expensive looking aspect of the movie to me seems to be the use of a helicopter towards the end. Did anyone notice that Darkman's burnt up face looks remarkably similar to Evil Ash's undead face in 'Army of Darkness'? The bottom of the jaw especially looks to be an almost identical design, still great looking though, the makeup and prosthetics are really effective in this film. I also really liked the tiny scene where Westlake's hands get fried in a wicked little stop-motion sequence. Its little touches like that that are pure Raimi and they look marvelous, plus its always nice to see the old methods being used. Looking back now the rage sequences in Westlake's mind are quite amusing too, its all very basic. On the whole this movie is in all honesty a bit poor visually and not exactly an original concept. The acting is passable throughout but clearly hokey, its a good job Larry Drake is so fantastically cool, evil and distinctive looking as the main bad guy Durant otherwise this may have sunk without a trace. I think the film could of done with some more action sequences at night, hence Dark...man. I realise this title isn't suppose to simply mean a dark brooding gothic type character, its more to do with his damaged psyche and where it leads him. But if ever a character did need some murky menacing action set amongst neon lit skyscrapers its this. Still, you gotta give big kudos to Raimi for thinking this colourful character up out of thin air, to look at this film you could easily be mistaken for thinking it was an adaptation of an already established comicbook character. That is a pretty solid achievement right there.

Alan Moore could probably lay claim that 'Darkman' thusly plunders the seriocomic origin story of his brainchild 'Swamp Thing' with the trope of an ingenious scientist being scorched by thugs in one of his own experiments and being revived as a freakish hybrid. On the other hand though, Sam Raimi doesn't squander the property on a shoestring budget ala Wes Craven's chintzy adaptation and Raimi is a certifiable maestro of gallows humor (ex. Liam Neeson shrieking about his "fucking" pink elephant prize while his malleable facial prosthetic is melting away). Honestly, the ebullient albeit derivative 'Darkman' is Raimi's audition for his 'Spider-Man' gig and it trounces that trilogy by leaps and bounds. He doesn't mock the material (he even rationalizes why the formula is only efficacious at night) and before he was an AARP action hero, Neeson is a superb fit for the disfigured crusader. Creatively the cinematography during the stuntwork are unparalleled with Neeson's head being smashed continually through glass cabinets during Durant's raid on his lab. The carnival of action scenes is absolutely crackerjack and thrilling with the helicopter-dangling denouement as a centerpiece (Westlake's Road Runner feet atop a truck is a hilarious use of speed ramping). One drawback is Danny Elfman's operatic score is too reminiscent of his other Tim Burton opuses.

A classic revenge story that features some awesome Liam Neeson overacting. I think Darkman is an extremely interesting character. It sure does pack some awesome B-movie style punches due to Sam Raimi's great direction. The Bruce Campbell cameo is just the icing on the cake. Letter Grade: A-